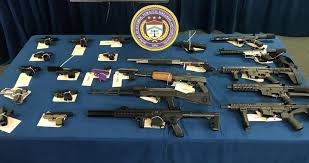 Concord, California – Charges were filed Tuesday in federal court as a result of a multi-agency investigation targeting suspected members of the Sureno street gang and their alleged involvement with selling drugs across Contra Costa County, but primarily in Concord, with numerous transactions occurring in a shopping center parking lot at 1500 Monument Boulevard, authorities said.

“Sureño gang members claimed control over this shopping center, referring to it as ‘The Block’ or ‘The Box,’ and described it to undercover officers as a kind of ‘one-stop shop’ for guns and drugs,” according to a news release issued Tuesday by the office of U.S. Attorney David Anderson of the Northern District of California.

“Today’s charges explode the myth of the non-violent drug dealer,” Anderson said. “Drugs are expensive. Drugs are dangerous. Where we find drugs, we almost always find guns. What is particularly appalling about today’s charges is that the defendants did not even bother to hide the guns or drugs. Rather, the defendants allegedly peddled their products in broad daylight in public spaces.”

ATF Special Agent Gorman described working with the Concord Police Department since April 2019, and then with other agencies, “to address problematic gang activity that was occurring within Contra Costa County.”

“Law enforcement partnerships create an unwavering unified front against violent crime and this collaborative effort between local and federal agencies is evidence of our shared focus,” Gorman said. “ATF remains committed to working hard and doing our part to make this region a safer place as our pledge to protect the public is one ATF takes very seriously.”

Of the 15 defendants charged federally, eight were taken into custody Thursday. Three additional defendants are due to be transferred from state to federal custody, while two more will stay in state custody as of Tuesday. The whereabouts of the remaining two federal defendants were unknown.

Here are the 15 defendants facing federal charges as a result of the investigation:

“Violent crime does not stop at a city’s border, and our relationship with our federal partners allows us to bring those who use violence and intimidation in Concord to justice,” Bustillos said.

The investigation called “Operation Boulevard Blues” was led by the Concord Police Department. Not only did the large-scale, multi-agency operation result in federal drug and gun trafficking charges, police said it also included arrests connected to several unsolved homicides.

According to the Concord Police Department:

“Operation ‘Boulevard Blues’ ended Thursday morning with 30 search warrants executed across Solano, Sonoma and Contra Costa Counties. Nine of those warrants were conducted in Concord. The focus of the investigation was the Sureno gang along Monument Blvd.

“Our operations resulted in over 26 individuals charged with state and/or federal charges that include murder, attempted murder, conspiracy to commit robbery, illegal weapons, and gang violations.

“‘Boulevard Blues’ resulted in solving four murders (three in Concord and one in Antioch):

“In addition, the operation recovered over 70 firearms, including a machine gun, an AK-47 with 100 round drum, suspected firearm suppressors, ammunition, over $50,000 in cash, approximately 10 pounds of methamphetamine, over 400 grams of heroin, over 2,500 grams of cocaine and over 900 fentanyl pills.

“As always, keeping our community safe remains a priority for our department. We want to thank our community for your unwavering support and cooperation.”