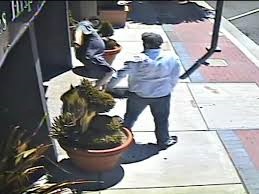 Concord, California – A man was arrested in connection with the assault of an elderly man earlier this month in downtown Concord, after citizen tips poured in to aid with the suspect’s identification, according to authorities.

The incident, which occurred Aug. 3 at about 1 p.m. and was captured on a surveillance camera on the 1800 block of Colfax Street, shows a male pedestrian at first walking away from the senior, then turning back and forcefully shoving the victim, knocking him to the sidewalk. (See video below.)

The victim suffered severe injuries in the assault — an attack that happened “for no reason,” the Concord Police Department said Tuesday.

Officers had shared the video on social media, asking for the public’s help in identifying the suspect in the case, which led to the arrest of Lennon Desmond Puldagrealy, police said.

Puldagrealy was booked at the Martinez Detention Facility on $180,000 bail. No additional information was released on the suspect.

The department thanked the community for its assistance with the incident, adding,”As we have said before, we couldn’t do this without you!”