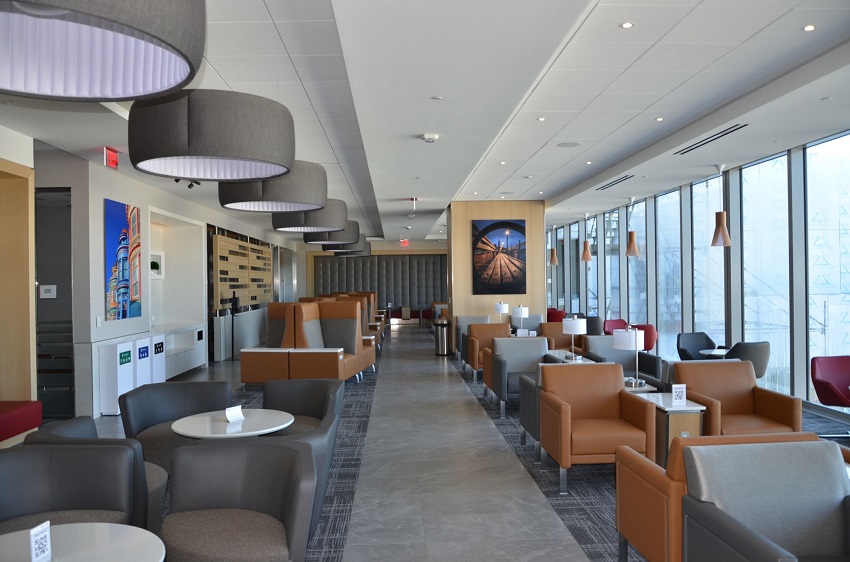 After a lengthy delay caused by the COVID-19 pandemic, American opened its highly anticipated new Admirals Club in Harvey Milk Terminal 1 at San Francisco International Airport on Tuesday — with some modifications to keep passengers and airline staff safe.

American gave SFGATE an exclusive first look inside the new lounge, a space many frequent SFO Admirals Club visitors have been eager to see.

The lounge is across from Gate B13 and will be open every day from 5 a.m. to 3:30 p.m. Those times may change, depending on American’s flight schedules at SFO.

Inside the check-in lobby, guests will be greeted by agents sitting behind plexiglass shields at a brightly lit reception area.

Social distancing markers on the floor remind fliers to spread out, and hand sanitizer is available at every turn. Masks are required to be worn inside the lounge, unless guests are eating or drinking.

The reception area recently opened as a passenger service center to help troubleshoot tricky itineraries, but will now check in Admirals Club guests. Like most SFO airline lounges, the actual “living area” of the lounge is located on another level. In American’s case, it’s a quick elevator ride upstairs.

Once inside, travelers will be immediately drawn to the panoramic views of the airfield. With floor-to-ceiling windows that run the length of the club, this space is stunningly bright, open and airy.

Some flights will board directly from the lounge.

There’s not a bad seat in the house to gaze out at the international terminal across the ramp and to view the hubbub of construction activity happening down below as workers build out the final gates in the Concourse B project. Although nowadays you’re more likely to spot construction vehicles than airplanes roaming this part of the airport.

At 11,634 square feet, the new Admirals Club is 20% bigger than the former Admirals Club located in Terminal 2. It can seat 208 people, but for now, it will operate at 50% capacity to allow for social distancing.

The American Airlines avocado toast bar is back in business.

Beer and wine will be available at the bar, but the bar stools have been removed to keep unmasked drinkers away from the bartender.

Snacks, including bagels, cheese, brownies and other goodies will be individually wrapped instead of the buffet-style offering clubgoers were accustomed to pre-pandemic.

American’s famous avocado toast bar will return in the mornings, but entrees will be prepared by a staff member behind plexiglass. In the afternoons, the avocado toast bar becomes a guacamole bar, which is just as popular.

Different types of seating around the lounge cater to whatever mood you’re in. There are tables and chairs for eating in the dining room, cushiony recliners elsewhere for relaxing, and four chaise longue chairs in a designated quiet area for napping.

There’s also a business center, two private “phone booth” rooms to take cellphone calls, and two shower rooms to freshen up. A VIP suite with a six-person conference room can be rented out for business meetings, whenever those start happening again.

A Universal Studios-themed children’s play area to entertain young fliers will stay closed for now because of public health orders.

Photographs of San Francisco landmarks can be found around the new club to give the venue a local touch. Chinatown, the cable cars, the City Hall rotunda dome and the city skyline as seen from Pier 15 are all prominently featured. Webcor was the general contractor that completed the project.

Bonsai trees made the move.

Frequent visitors to the old Terminal 2 club will be pleased to know the airline has kept the three synthetic bonsai pine trees that became synonymous with the SFO Admirals Club experience. (See the slideshow at the top of this post for a full look at the new space.)

The three trees were carefully removed and reinstalled in the new lounge. One is located at the reception area, while the other two have been planted upstairs.

Club staff said many frequent American fliers enjoyed “checking in” every time they’d travel by posting a photo of the trees on social media.

Who can get into the new SFO Admirals Club?

-Fliers booked in first or business class on American flights between SFO and New York City.