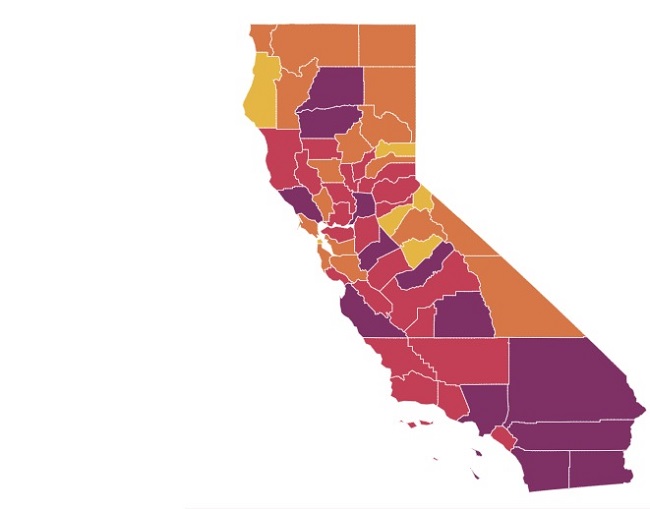 Contra Costa County, California – An increase in COVID-19 cases and hospitalizations prompted Contra Costa County officials to reinstate the more restrictive Red Tier. This happened after a brief experience with life in the Orange Tier.

The county entered the orange tier of California’s Blueprint for a Safer Economy on Oct. 27. Since then, the county has seen a steady rise in the average daily number of new cases.

Emphasizing that the action is being done to protect residents, officials voiced optimism that the county could move back to Orange Tier status if the trend reverses and declining numbers hold.

The tougher restrictions, which took effect Friday, Nov. 6, include:

How quickly things changed was reflected in the outgoing phone greeting at the California Grand Casino in Pacheco. Callers now hear a blunt “We are closed” – whereas a few days ago it was a far more optimistic message for would-be patrons.

The homepage of the casino’s website states: “The county issued guidance on Nov. 4 requiring that we move all our games to our outdoor facility.”

As the county bounces between the two tiers, for some business it makes no difference. Even the initial easing of restrictions was not enough to warrant reopening their doors.

Round One Entertainment, which operates a bowling alley in the Sunvalley Shopping Center, is one example. Manager Susan Cannon explained that they could only use two of the 11 lanes under the Orange Tier limitations. As a result, it doesn’t make fiscal sense to reopen – which continues to leave 50 employees on ice.

Citing all the calls she fields on a daily basis from residents asking if they are open, Cannon expressed optimism that they may be ready by Thanksgiving. But only if the data looks more favorable.

Contra Costa would not have originally qualified for the Orange Tier recently had it not tested more residents than the state average. California adjusts the case rates of high-testing counties downward to reflect their work controlling the virus.

The county will remain in the Red Tier for at least two weeks. The state could move Contra Costa into the less-restrictive Orange Tier if its metrics qualify. Updates to the official numbers occur every Tuesday.