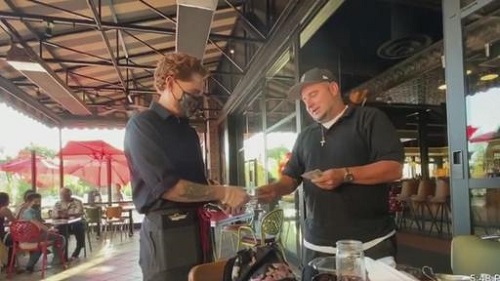 Concord, California – At Lucille’s Smokehouse Barbecue in the Sun Valley Mall in Concord, the favorite customer among the staff these days is most likely a plumber from Pittsburg named Brian Murphy.

“There’s no better feeling than helping someone out in their time of need,” said Murphy.

That help came this past Sunday, and was videotaped.

When Murphy had dinner there with two friends, he gave his waiter, Peter Murray, the tip of his life. It was money he raised online through the Venmo Challenge to help workers during the pandemic.

“It doesn’t take a lot to make a big impact in somebody’s life like this. And I was really interested in seeing the reaction of this random server at this random restaurant we had picked,” Murphy said.

Murray has worked at Lucille’s for about four years.

“It blew my mind. I had no idea this was going to happen,” Murray said.

Murray shared some of the tip with his co-workers and says he will put what’s left towards rent.

“I can’t believe there are people out there in the world that are that generous and want to help people,” Murray said.

“The minute we told him he kind of got taken aback and paced back and forth like he didn’t know what was going on. That was the icing on the cake,” said Murphy.

Murphy said he’d seen the Venmo challenge online on other places and wanted to try. He says some 250 people donated anywhere from 50 cents to $100.

Then Murphy decided on Lucille’s.

“The fried chicken is so good. That definitely played a part in why we wanted to go here,” he said.

“On the way out we wanted to tip the host too,” said Murphy.

“It was a really nice gesture from Brian,” said Toy.

“I really like pulling the community together to try and help somebody,” said Murphy.

Murphy says he’s thinking about doing this again, at another business.