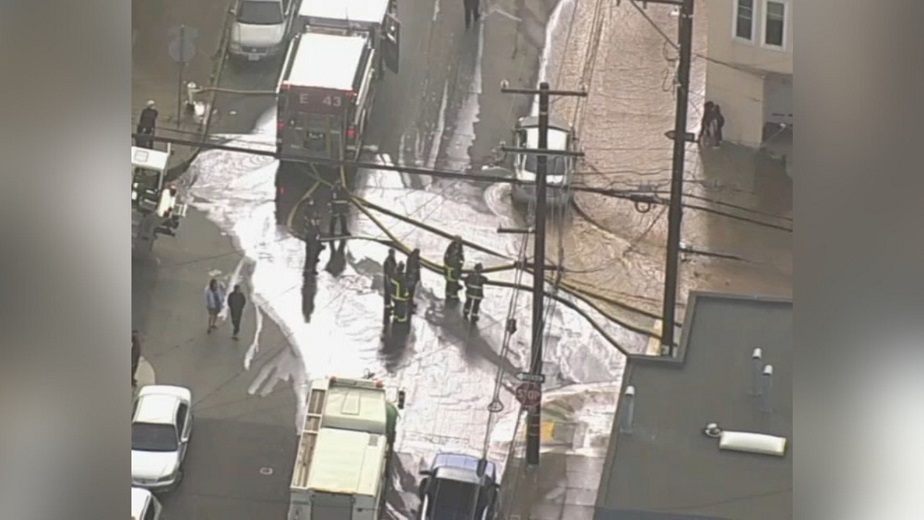 The water main break occurred close Brunswick and Pope Streets in the Crocker-Amazon area. The water was shut off, but hundreds, if not thousands, of gallons of water flowed onto the streets, creating quite a mess.

Cell phone video shows car tires being pounded by the water as it poured down the streets.

“I saw a lot of water there, it was like dirty water came out, very fast water,” says Evelyn Auguis whose building flooded.

The fast flowing water could be seen rushing down hills from our SKY7 chopper mid-afternoon.

The break was so bad, water flowed more than a quarter of a mile down the road to the Outer Mission.

“They are highly pressurized pipes. When you have a break like that the water will fly up, it’s how the system operates,” says Will Reisman with the San Francisco Public Utilities Commission.

And it didn’t just flow down the street — at least two homes were flooded. ABC7 News was there as residents scooped up water and dumped it in their backyard.

“I’ve been living on this block my whole life and I’ve never seen a flood that severe,” says Brandon Farrelly who continued saying, “it came close to everyone’s house, honestly everyone was rushing outside so they don’t get flooded because water damage is, you know, pricey!”

Officials say the water main that broke was 88-years-old, and say at this point it’s unclear what exactly caused the break. Water service was limited for some in a six-block radius, but crews, fortunately, now have the upper hand on what was a scary situation for those living in the neighborhood.

“Like a waterfall, like we were in Yosemite, and the water was just pouring down the river,” said witness Craig Jones.

“Honestly, everyone came out to help each other, which is honestly really good thing. Never seen that before on my block,” says Farrelly.