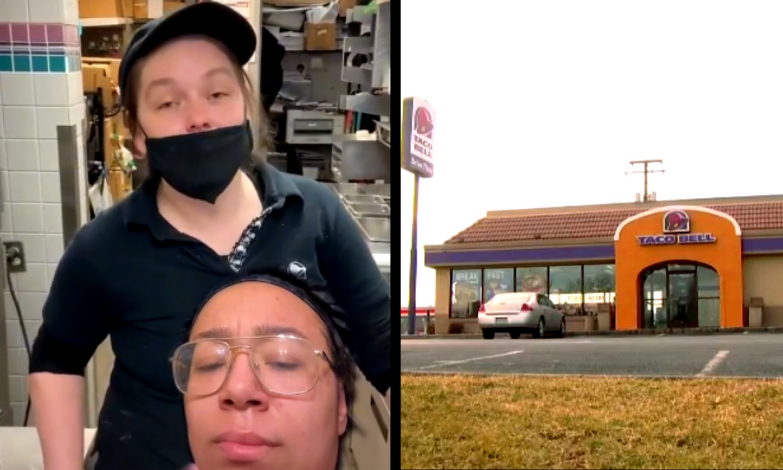 A man lost his job after the manager of a Taco Bell restaurant fired him because he recorded the manager’s racist rant saying that Black employees mop the floor just because they are Black. The video was posted online and immediately gained a lot of attention reaching millions of views across multiple social media networks.

According to WSLS report, the video posted on TikTok few days ago shows the manager’s reaction and explanation why she always makes certain store employees mop the floor. The latest incident prompted the company to issue an announcement regarding he incident and they even offered the fired employee taking his job back.

The racist rant incident took place at a Taco Bell location in Virginia last week. The employee who recorded the video, whose identity was not revealed so far, said he recorded the incident because if his video was not out there, nothing would have happened and he would probably still be working there, happily ever after.

The manager, who was identified in the viral video as Stephanie, fired the employee right after the employee questioned why he was always assigned to sweeping and mopping duties inside the restaurant. Just like any other working day, the employee was scheduled to work the next day, but he was told not to come back as scheduled.

“She told me I could leave, I said ‘I’m not leaving until 11.’ That’s my usual time that my general manager put on there,” the employee said. “She said, ‘Well I don’t need you.’ So we had words back and forth about me leaving, about me not coming in tomorrow, about how she didn’t need me.”

Although the video was recorded for a purpose to raise awareness about racism, as per the employee’s claims, his initial idea and sacrificing his job are nothing compared to what happened days after the video went viral on TikTok. According to him, he and his family received a threatening message from a number saying they were going to kill him and his kids.

The attention this video received from the online community forced the company to release an official statement regarding the incident although the local Taco Bell store refused to comment the video.

“We take this seriously. Our franchisee who owns and operates this location immediately addressed the incident in line with their policies and has informed us that the person seen in the video is no longer working for them,” Taco Bell Corporate said in the statement.

#greenscreenvideo @tacobell do you allow this behavior?

Father denied by court to take his 6-year-old son home because his wife is not vaccinated against Covid-19, appeals the court order
Autistic student with special needs beaten in the school restroom by another student, temporarily suspended from school for no reason, the mother speaks out