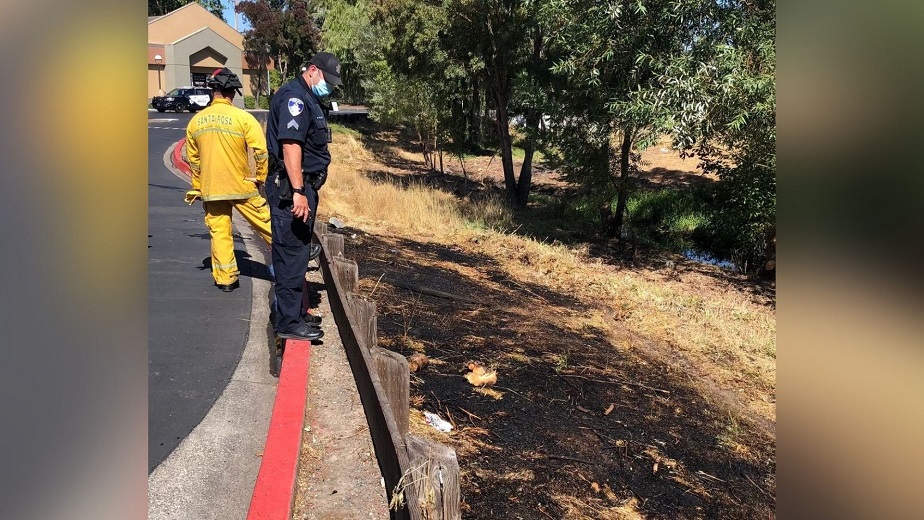 Concord, California – This wildfire season, almost a million acres have burnt in Northern California, a number that meant nothing to one Bay Area arsonist on Saturday. Luckily, a few good Samaritans helped to keep that number from rising any higher.

Someone set fire to a dry patch of grass off the side of the road at the Bay Village Shopping Center at 3080 Marlow Road in Santa Rosa yesterday, according to a witness. Knowing something wasn’t right, the individual decided to contact the cops and wait for them to arrive and capture the suspect — who was reportedly fanning the flames to make them burn quicker. Fast forward a few minutes… and that one individual was joined by several other good Samaritans, all of whom were there to hold the lawbreaker accountable for their ecologically irresponsible behavior.

Per a news release from the Santa Rosa Police Department, when officers arrived on the scene, they found the suspect, 43-year-old Jacey Steven Ludwicki of Santa Rosa, surrounded by several people. Upon questioning, one of the people in the group told police the suspect “lit something on fire” before dropping it on the ground to catch on the grass beneath. Ludwicki, too, was also accused of intentionally fanning the flames to grow the small blaze, which he started near a dry creek bed.

The release noted that Ludwick was taken into custody by on-site police. (When Ludwicki began moving away from the fire, he was quickly detained by the officers who soon after located a cigarette lighter on him.) Ludwick admitted to the crime during their arrest. Currently, the fortysomething was arrested for “451 (d) PC-Arson (a felony) and 1203.2 PC-violating his probation terms (a misdemeanor).”

Thankfully, the 400-square-foot  brush fire was promptly put out by firefighters.

According to California’s penal code, “willful or malicious arsons” can result in fines of up to $10K and, should the arson be conducted to property or on forest land, may result in six years in prison.