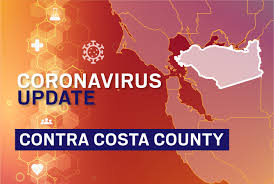 Contra Costa County, California – Three Bay Area counties have, in new coronavirus numbers, surpassed records set over the past week, as public health officials continue to deal with a surge in cases nationwide.

In new numbers, Contra Costa, San Francisco and Santa Clara counties all recorded the most cases since the start of the pandemic, beating out new daily case records that were broken in the past four out of six days.

That contributed to the entire Bay Area recording the most cases ever as well, with 2,691 new cases reported for a total of 164,291 cases across the nine-county area. According to data compiled by this news organization, so far in the Bay Area 2,027 people have died, including seven people who were reported dead from the virus Saturday.

Contra Costa County, which had recorded the highest number of cases Dec. 1, passed that record as public health officials reported 587 new cases — the most ever — for a total of 26,355 cases. While hospitalizations across the state were up and ICU beds are increasingly becoming more rare as the coronavirus continue to surge, deaths from the virus have not spiked in the same way yet.

Contra Costa County officials reported five new deaths from the virus, the same number of deaths recorded at the previous peak of the pandemic in early August.

San Francisco, which had been a model to the country for COVID-19 response, recorded its most cases since the start of the pandemic. Health officials reported 271 new cases for a total of 16,479. A total of 164 people have died from the virus in the city, two of them reported Saturday.

Santa Clara County has consistently been recording the most cases since the start of the pandemic over the past six days, with four of those days comprising record-breaking numbers. On Saturday officials again recorded the most cases ever with 871 positive tests for a total of 38,388 total cases. Officials say 503 people have died of the virus, though no new deaths were reported Saturday.

In the rest of the Bay Area cases are continuing to surge, though not in the same rate as hotspot counties.

In the North Bay, Napa, Solano, Sonoma and Marin county officials reported 175 new cases of the virus, the least recorded across that region since the start of the spike about a week ago. The four-county area has recorded 35,861 cases total and 395 deaths. Officials reported on Saturday that five more people died of the virus.