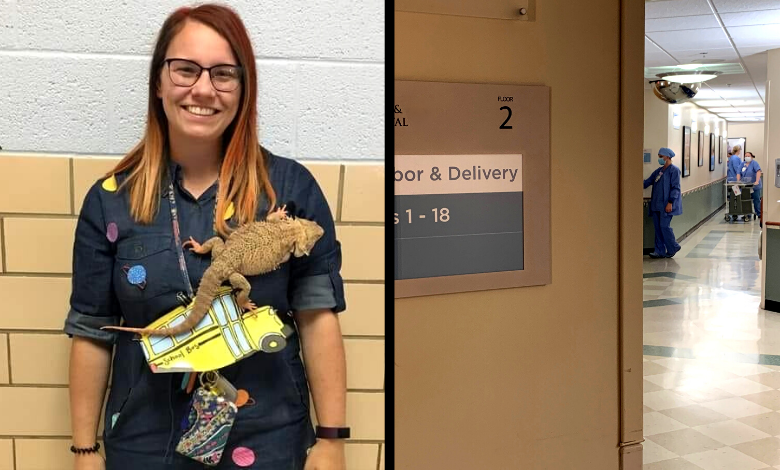 Since the start of December last year, America has been heavily hit by the Omicron variant setting record high number of cases and hospitalizations on a daily basis despite the decent vaccination rate. The highly contagious Omicron variant of the Covid-19 virus was the first ever variant to easily evade both vaccine and natural immunity quickly becoming the most dominant variant countrywide.

Even though those infected with Omicron are likely to develop no to mild symptoms in most of the cases, the vaccination remains the best weapon against the deadly virus. Vaccine immunity wanes over time and that’s why the fully vaccinated are advised to get the booster shot and get the best protection currently possible against Omicron and any future variants of the virus.

Alexandra Chandler, a young mother-to-be, followed the FDA, CDC and health experts’ advices to get vaccinated against Covid-19 last year shortly after she discovered she was pregnant after years of fertility struggles. She was expected to deliver her newborn at the beginning of January.

Early January, she was admitted to a local hospital and delivered her son Beau via a successful cesarean section. As a part of the hospital procedure, she had to test on Covid-19 and her test came positive. Fortunately for Alexandra and her newborn, they both felt well and were sent home few days later. But things changed in a matter of days.

According to KWTX, Alexandra’s condition worsened due to the virus. On Jan. 15, she was once again admitted to hospital after she was unable to breathe on her own. Alexandra, beloved fifth-grade teacher from Texas, spent the next few weeks in hospital. She ended up being intubated after she experienced a double Pneumothorax where both lungs collapse. After weeks-long battle with the virus, Alexandra died on Feb. 13.

“After years of fertility struggles and finally giving birth, COVID-19 has robbed Alex of the joy of being a first time Mom,” a GoFundMe set for her husband and newborn son says. Jenny Clay, Alexandra’s mother, wrote on a separate GoFundMe page established for her, that her daughter was “first in line” to get vaccinated. Clay said her daughter didn’t want to get sick or cause harm to others and did “everything she could to protect herself from COVID-19.”

Friends, family and colleagues from the school district were devastated when they heard the sad news about Alexandra’s death. Her mother was among the first to inform her friends and family on Facebook. “It is finished. She has passed,” Jenny Clay wrote. “Our hearts are shattered. The best girl in the world. FU COVID.”

In a statement announcing her death, KISD spokeswoman Taina Maya said Chandler will be “greatly missed.” The school called her a dedicated “teacher, friend, and mentor to her peers and students” and expressed their condolences and prayers to her family.

As per the New York Times corona-tracker, news cases continue to decline following the several-weeks-long trend. On Friday, 85,853 new cases were added, but the 14-day is going down now reaching 68,642 cases per day which is 63% decline.