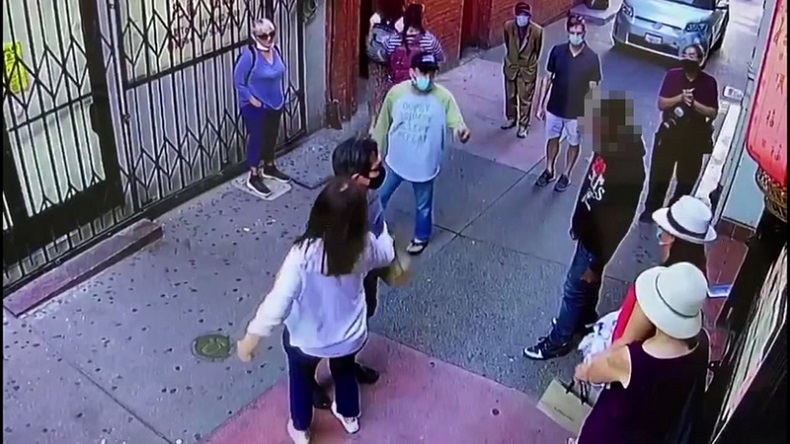 The owner of a popular Chinatown business is being hailed by his colleagues after jumping in to stop an assault on a tourist from escalating.

The incident happened Saturday afternoon outside Chinatown’s iconic Golden Gate Fortune Cookie Factory. A man in a black sweatshirt singles out one of about a dozen tourists and attacks. ABC7 chose to blur the man’s face since he has not been arrested.

“The guy just pushed real quick…he did the first push real hard,” says Kevin Chan, co-owner of the business that’s been in operation since 1962.

Kevin, recounted the turn of events, “The guy asked the Black guy, ‘Why did you push me?’ The Black guy said, ‘because you stared at me two blocks away!'”

What makes this story remarkable is what unfolds next. Kevin immediately steps in after the shove, and lifts up his shirt to reveal…

“I have a concealed carry and I need it to protect my business,” Chan said.

Just the sight of the gun is enough for the man in the black sweatshirt to leave.

“He was scared and he didn’t want to go any further.”

Tourism in Chinatown was down 35% before the pandemic. Once COVID-19 hit, business went down for some as much as 90%. While some tourists are coming back, as ABC7 witnessed Sunday night, Kevin can’t afford for incidents like this to scare visitors away.

“People will come here and they’ll have a bad impression and blame the Chinese community.”

Kevin decided not to file a police report afraid it would go nowhere. So he is choosing to tell his story to send a message to local leaders.

Despite his staff calling him a hero for descalating the situation so calmly, Kevin insists he is not a hero.

“I’m just doing my job to protect my family. My business. My people. My guests.”