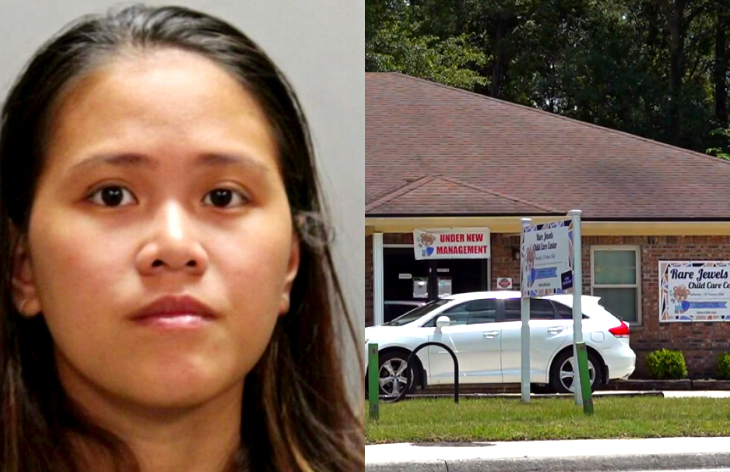 A young woman was arrested late last month and released on bond after she was caught on camera abusing little child as she was forcefully trying to get the child to sleep while she was taking care of the minor at a daycare center. The daycare center owner spotted the 23-year-old on surveillance camera and immediately called the local authorities, who arrested her shortly after responding to the scene.

According to News4Jax which was among the first to report about this incident, the daycare worker was identified by the local authorities as S. Mangalindan. The young woman was arrested the same day the daycare owner saw her abusing the child on surveillance camera, and she was later charged with one count of child abuse.

After reviewing the “disturbing surveillance video” of the incident that happened on June 24 at the Florida based Rare Jewels Child Care Center, the daycare owner immediately fired Mangalindan. In addition, the owner told the TV station that Mangalindan was allegedly “rough with several children and verbally abusive toward children while using profane language.” The daycare owner, identified as Latasha McCray, reviews the surveillance recording every time she is not at the daycare center. In the case of Mangalindan, she was not at the daycare center, but she reviewed the recordings from that day, and one specific incident caught her attention and made her feel sick. She immediately called the police.

“I did see a teacher placing her hands on a child’s bottom, popping him, and then roughly laying the child down for a nap. And that is something we are not supposed to do,” McCray said. “Initially, I was very upset and brought to tears because even though parents bring their children here for care, these are our kids,” she continued.

From what was seen in the surveillance video footage, Mangalindan was having a hard time getting the child to nap. Initially, the daycare worker held the boy with the face down toward the baby cot before she released the child. She then left the child for a minute or two, but picked the toddler up as soon as she returned and forcefully forced the child down so hard that the toddler bounced. Moments later, the toddler tried to crawl off the cot, and that’s when, according to police, Mangalindan got frustrated and forcefully yanked the toddler’s leg.

The owner was nothing but devastated when she saw the daycare employee’s behavior. The incident prompted her to immediately fire Mangalindan and report her to the police. Per her claims, she has been operating the daycare center for a while, and she has never tolerated similar behavior in the past. The owner further said that she and all the daycare workers remain committed to providing the best and safest possible environment for the children they take care of.

The arrest report indicates that the child didn’t have any visible injuries. However, Mangalindan’s intentional actions could reasonably result in physical or mental injury to the child. Although her actions were clearly seen on the video footage, Mangalindan continuously claimed to the local police that she had no intentions of hurting the child while she was trying to get the toddler to sleep. She also told the police that her child also attends the same daycare center.

The owner of the daycare center informed all parents of children who attend her daycare center about the incident. She believes that transparency is key to maintaining a good relationship with parents as that later turns into trust. Although some of the parents were initially concerned and threatened to stop bringing their children to the daycare center, the owner convinced them that children’s safety remains a top priority for all the daycare workers, including her.

Mangalindan’s next court date is scheduled for July 20.

21yo woman, accused of ‘throwing 23-month-old boy into the wall and shaking him up pretty bad’ while babysitting him, faces upgraded charges after the toddler died due to the injuries sustained in the incident
Former employee sues Walmart after the company denied requests for pumping milk breaks and didn’t allow pregnancy-related absences ultimately resulting with contract termination