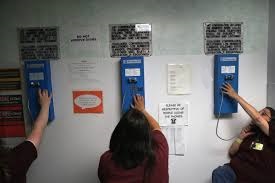 The San Francisco Board of Supervisors voted unanimously Tuesday afternoon to permanently end the practice of charging those in county jail for phone calls, and to stop marking up items sold in jail stores.

The measure, among the first of its kind in the nation, codifies a set of reforms that Mayor London Breed introduced last year in her annual budget proposal.

“What happened last year was really an initial first step. This makes those changes permanent,” said Anne Stuhldreher, director of the Financial Justice Project in the San Francisco treasurer’s office, who worked with Sheriff Paul Miyamoto and other city officials to push the legislation forward. The measure, she noted, also ensures that fees will no longer be charged for video calls and the use of electronic tablets.

“We are never again going to take a commission or make money off of products and services provided to incarcerated people and their support networks, their families,” she said.

Until last year’s changes, San Francisco inmates were charged 15 cents a minute for phone calls and had to pay a 43% markup on products sold in the commissary, including basic items like soap and food.

“It can really add up,” Stuhldreher said. “It’s people’s families who really foot the bill. And our research shows it’s almost always low-income women of color.”

Stuhldreher said she heard from family members of inmates who were forced to choose between staying in touch and paying their utility bills.

In San Francisco, she noted, African Americans make up less than 6% of the population but represent roughly half of all incarcerated people.

“The more people stay in touch with family, the better they do when they get out,” Stuhldreher said, pointing to research that found lower recidivism rates among former inmates who while incarcerated had maintained close contact with supportive family members.

For Mayor Breed, who grew up in public housing and whose brother is serving a 44-year prison sentence for involuntary manslaughter and armed robbery, the issue is particularly personal.

“It’s something that has never sat well with me, from personal experience of the collect calls, and the amount of money that my grandma had to spend on our phone bill, and at times our phone getting cut off because we couldn’t pay the bill,” she told KQED in a 2019 interview.

Being unable to provide support to family members behind bars can be “depressing and frustrating,” she said. “This was something I thought was an important issue, to address equity and fairness in our criminal justice system.”

‘Justice Should Be Blind’: An Ethicist’s Case for Decarceration

State law allows counties to charge inmates premiums for both calls and jail commissary items, provided those profits are used to support rehabilitation and reentry services. San Francisco was generating about $1.7 million a year from those fees, which went into an inmate welfare fund — one that Stuhldreher hopes will now receive ongoing support through the city’s general fund.

“The idea is that those services should be supported in the same way we pay for everything else, and not on the backs of incarcerated people and their families,” she said.

The cost of phone calls in jail was initially halved following Breed’s budget proposal last year, with commissary markups subsequently phased out. Since the start of the coronavirus pandemic, inmates have been able to make about 60 minutes of free calls a week. And beginning August 1, all calls will be free.

The change is part of a growing trend in San Francisco and other, mostly progressive jurisdictions to reduce prohibitive fees that disproportionately affect low-income people of color. In 2018, the county eliminated administrative fees charged to people in the criminal justice system, writing off $32 million in debt owed by 21,000 people. And in 2014, the Sheriff’s Department allowed inmates to call their lawyers for free.

San Francisco follows New York City, which in 2018 became the first major city to  pass legislation making phone calls free from jail, a measure it put into effect last year. San Francisco’s ordinance, though, goes a step further, eliminating virtually all commissions that had previously been in place.