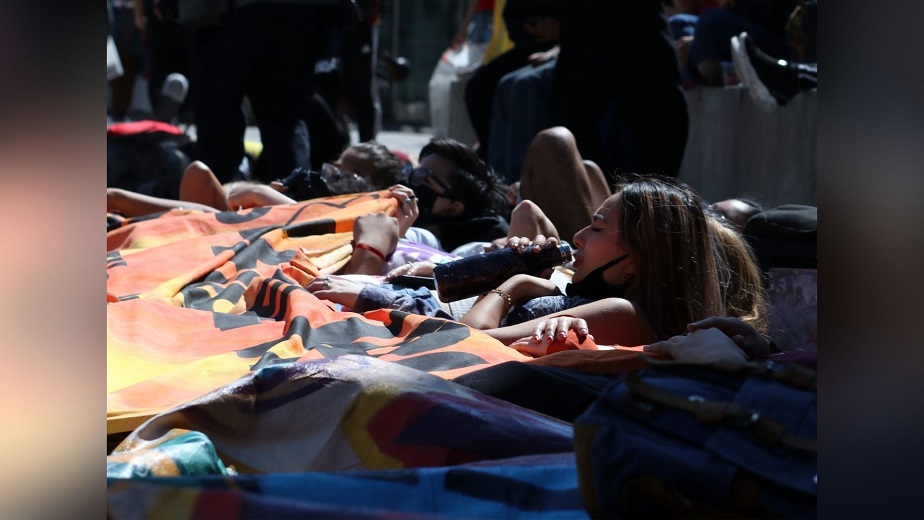 San Francisco, California – Hundreds of youngsters marched through downtown San Francisco with one goal, to raise awareness of climate change. Market Street was closed due to the protest.

Youth versus Apocalypse, together with other organizations, arranged a protest in Embarcadero Plaza at 10 a.m. for elementary, middle, and high school students.

The activists wore red and orange and held large images of flames and signs with slogans including, “No nature, no future,” and “Stop climate chaos.”

“Our world is literally on fire. Every day we have smoke days. That didn’t used to be a thing,” Youth vs Apocalypse Education and Organizing Coordinator Hannah Estrada said.

“We as young people shouldn’t have to march in the streets for this. But we’re letting that fire fuel the movement because we will literally burn if we don’t do something about this. … We are seeing the effects already. Whole communities have burned to the ground and they (politicians) have the audacity to tell us they’re doing the best they can. It’s not enough anymore when people are burning, dying, getting asthma, and cancer,” Estrada added.

“We’re in climate chaos; a climate catastrophe, and we need to make an immediate change. … There’s no time to just stand by and not do anything,” the 13-year-old Oakland High School student, Christopher Soriano said.

The activists marched along Market Street to the Federal Building on Seventh Street before heading to City Hall.

During the march, the activists staged “die-ins,” where they sat or lied on the ground to demonstrate the urgency of the climate situation.

The activists are calling on politicians like Gov. Gavin Newsom, Sen. Dianne Feinstein, and House Speaker Nancy Pelosi, to promote change. The activists want Congress to pass the $3.5 trillion U.S. Reconciliation Act, which would invest in nationwide climate change programs.

“I’m so proud of the youth that helped to organize and mobilize for this. … It’s really so inspiring and they really feel this movement in their hearts,” said Cory Jong, an educator and member of the Youth vs Apocalypse Adult Advisory Board.