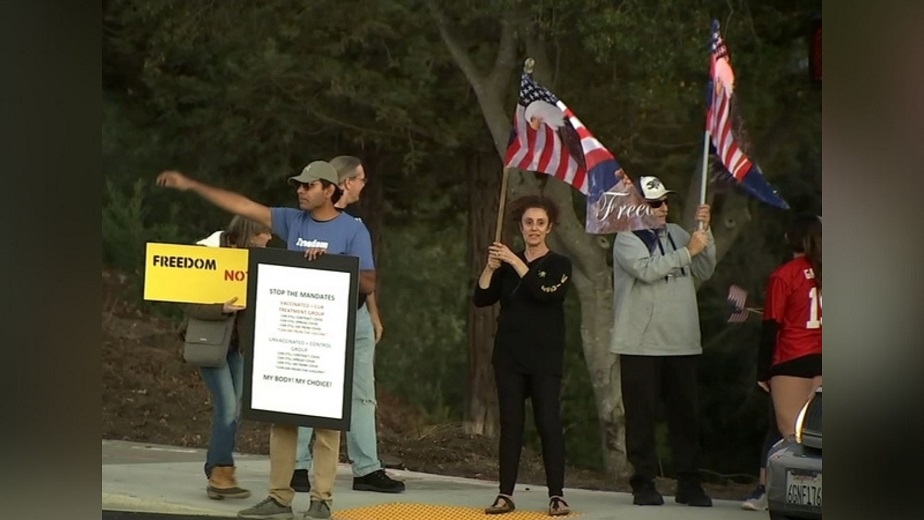 San Francisco, California – Hayley Herrera, a student at San Francisco State University, described the received notification “Submit your COVID vaccination record *or* request an exemption today to avoid a spring registration hold” as a risk to her future. Only online classes are available for the Fashion Design major. She stated that she plans to graduate next semester, in the spring of 2022. She is now concerned that the policy would put her back.

“People have dedicated time and money to this institution. And now they’re denying them the right to go there because of this. Something that, you know, is going inside our bodies,” said Herrera.

The policy she’s referring to is one set by the California State University (CSU) system.

“CSU’s policy requires all students submit proof of COVID-19 vaccination or have a medical or religious exemption on file prior to coming to campus. The university-wide deadline was September 30,” Toni Molle, the Strategic Communications and Public Affairs Director for the CSU Office of the Chancellor said in a statement.

However, SFSU students were required to comply by Thursday, or risk a hold on registering for next semester’s classes.

“The implementation of that policy is handled on a campus-by-campus basis. So obviously, we’re a little bit behind the deadline that they had. But that’s to give people a little bit of time to get that taken care of,” said Bobby King, Director of Communications for the Office of the President at SFSU.

Students must be in compliance, even if taking classes remotely.

“There are going to be situations now- for example, going into the library to study, going into an academic building for some activity- where it’s just going to be impossible to confirm on an individual basis who’s complied with the policy,” King continued.

He said SFSU is trying to follow the CSU policy, while also considering what he described as “the desire to meet public health goals of getting as many people vaccinated as possible.”

He said the university also has its own goals for getting more activities and more students on-campus in the spring safely.

“I get where they’re coming from,” Herrera said. “But I just think the whole situation is kind of wrong in the first place. So those concerns, they’re there, but like, they’re not. I have different concerns.”

“I haven’t set foot on campus in over a year,” Herrera explained.

She’s filing for medical and religious exemption. If submitted by Thursday, King said Herrera would be in compliance. Though the review process is expected to take some time.

“What happens if they deny my exemption form?” Herrera questioned. “Then it’s too late for me to apply somewhere else and all this other stuff. It’s like, then I’m just stuck not graduating and waiting a whole ‘nother semester.”

Herrera reminded, “I’m almost there with one semester left. And now it’s at stake because of this new mandate. So, yeah, I’m very concerned and there aren’t really a lot of options.”

In the CSU statement by Toni Molle, she continued, “In instances where students do not qualify to be exempt from our policy and are not vaccinated, all campus presidents were provided guidance to identify alternatives to students completely leaving the CSU. It is in the best interests of the student, the CSU and the State of California for them to remain enrolled in the CSU this fall, with appropriate safeguards, than to be dropped completely.

To that end, campuses are focused on connecting with every student who is not yet in compliance with the CSU’s COVID vaccination policy, to understand the reasons the student has failed to comply, explain the ramifications of non-compliance and assist the student with options and solutions.”

Herrera maintains Thursday’s deadline and the policy itself will make a tough situation even more difficult. She said classes at SFSU are already impacted.

“It’s been hard for me to hold up my end of the classes I need to take, by doing it all online,” she said.

“There’s only so many classes available online. It’s real. If I didn’t have priority registration because of my status as a senior, you know, it’s already really hard to get classes and that sets you back already,” Herrera continued. “If you can’t register, that’s setting your whole life back six months.”

According to Bobby King with SFSU, more than 98% of students have uploaded proof of vaccinations. He said less than 2% have requested exemptions.

“So, we’re not seeing a large number of students at San Francisco State impacted by the CSU policy,” he said.

Herrera said, “I just want to graduate. I just want my degree so I can go out into the world and be the person I want to be.”

San Jose State University (SJSU) confirmed it has also placed holds for spring registration for students who have not completed the attestation and verification process.