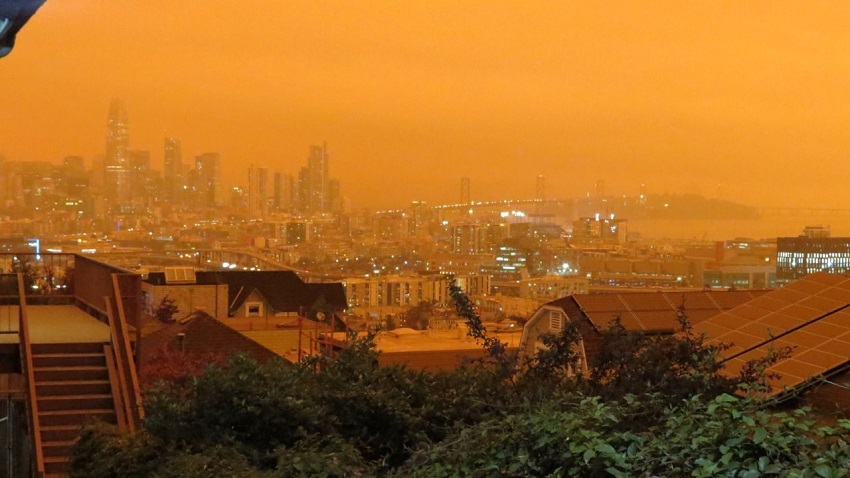 Concord, California – Amid the heat, air quality remained an issue on Tuesday. It marked a record 22 consecutive days of Spare the Air alerts. Smoke from the wildfires is causing unhealthy air quality up and down the state.

Many people in the Bay Area saw more of a hazy sky on Tuesday. Officials said the bad air quality was not as widespread as anticipated. Still, the worst spots were along the Bay Area’s perimeter including parts of the East Bay.

In Downtown Concord, most of the outdoor patio dining sat empty. Malia Obillo, an Oakland resident working from home, said she had to get out after being cooped up indoors. She questioned her decision after seeing the smoke.

“I don’t think we were thinking about it until we were driving here and we saw how bad it was. The sky was so red and we thought whoa it’s like a movie right now,” said Obillo.

From the Berkeley Hills, the smoke found all over the Bay Area was clearly visible.

“People were seeing the sun was kind of red and hazy and it was overcast,” said Aaron Richardson from the Bay Area Air Quality Management District.

People reported seeing a hazy sky as smoke from the wildfires traveled to the Bay Area.

“There’s a lot of smoke that was kind of blowing aloft from the fires up north of us,” said Richardson. “There’s the big Mendocino Fire and up in the Sierras, it’s coming down the Sacramento Valley.”

Air district officials said most of the polluted air stayed high in the atmosphere creating a different colored sky but the smell less noticeable. The marine layer also helped.

“Visually you can see it in the sky but it hasn’t descended down to ground level as much as we expected,” said Richardson.

The worst air quality readings were in Napa, Concord, Livermore, Pleasanton, Gilroy, and San Jose. Those areas had unhealthy levels for sensitive groups for most of the day and at times were hazardous.

Chanon described the dark sky as eerie, advising his employees to stay hydrated.

He said business outdoors has been slow the past two weeks and the restaurant that caters to families has had to close early. Those who do come are keeping their masks on.

“We do find our patrons wearing it at any little break so they don’t have to inhale the bad air,” said Chanon.

Air quality officials extended the Spare the Air alert through Wednesday breaking the previous record by more than a week. It was set during the Camp Fire in 2018. They’re predicting bad air again in the East Bay and North Bay on Wednesday.