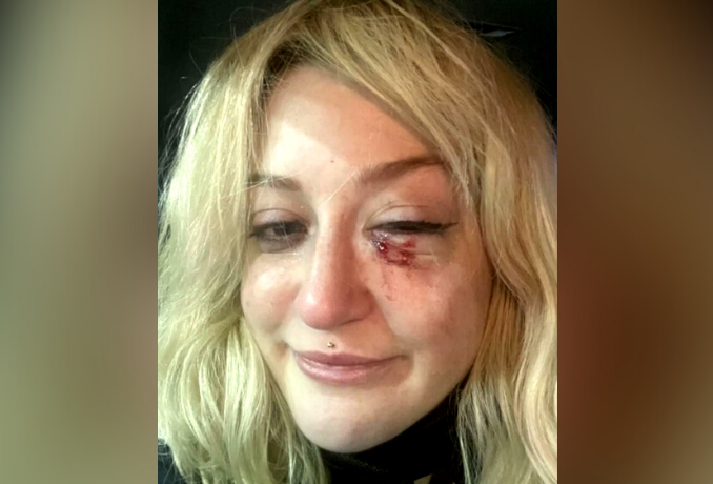 San Francisco, CA – What should have been fun Halloween day for Zoe Gisewhite, ended up to be horror weekend after she was attacked with paintball guns while she was waiting a bus at a bus stop.

According to the police report, Gisewhite was headed at Outside Lands Halloween weekend and while she was waiting for the bus, she was struck several times in a random, drive-by paintball shooting.

The woman suffered serious injuries and she might remain permanently blind in one eye.

The incident took place before midnight on October at the bus stop at Sunset Boulevard and Noriega Street in the Outer Sunset District. Her partner was with her at the time standing just next to her and he was uninjured.

“And a car drove by within a couple of minutes and just shot us from the car, never stopped, just continued,” she said.

“It hit him 6 times in back, and then hit me 3. I got hit in the leg, the hand and the eye. My eye immediately filled up with blood and shut. I couldn’t see anything.”

The police said that right after the incident, the car fled the scene at high speed.

“It’s healing very nicely outside, but inside there’s nothing there, I can’t see anything right now,” added Gisewhite.

Gisewhite said she doesn’t know who and why attacked her and just like the authorities, she believes this has been completely random attack.

“I want to think it was kids on Halloween, because that’s just what happens,” she said. “You do stupid things, but this is like irreversible and I just want them to know like this is my life now.”

The victim is not sure if she would be able to get back at work. She moved in San Francisco four years ago and she works as a colorist at Spoke and Weal.

“I just want someone to know that this is happening in the neighborhood, and if you’ve seen it, maybe they’ve been shooting your house or your car to come forward and kind of help me because I’m blind and I didn’t do anything,” she said.

She has a gofundme page set up to help pay for her medical expenses.