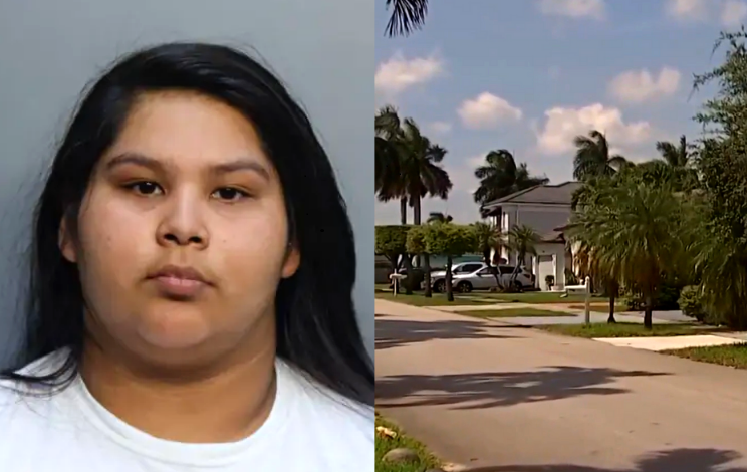 The local community and the neighbors of a 22-year-old woman were in total disbelief when they learned that her 3-month-old son was found dead at their home, while the mother was having her nails done in an at-home manicure salon which was to the residence’s garage. The mother, later arrested and charged, confirmed to the local authorities that she had intentionally left the baby in the tub with running water with the 3-year-old brother.

The story about the incident, that reportedly happened on May 20, was brought to the light of the day by Local 10 that obtained the arrest affidavit. According to the local station, the baby boy was found unconscious at the home just before 3 p.m. that day and the mother, identified as the 22-year-old A. C. Jimmie, informed the responding officers she left the boys home alone.

Per Jimmie’s claims, she left her baby son in a bathtub with her other 3-year-old son with the water running and went to get her nails groomed at a manicure station, which was in a garage. The police later said that the at-home manicure salon is approximately 62-feet away from where the bathtub is located in the master bathroom of the home.

The young mother was not concerned leaving the children home alone for 5-10 minutes since the nail salon was very close to the tub. She claims that she was confident nothing bad is going to happen while the children were in the tub with the water running, because the drain plug was missing. However, when she returned home, she realized she made a huge mistake because the tub was full with water as the drain had been clogged with a towel.

Jimmie found the 3-month-old baby unconscious in the water, while the 7-year-old was playing in the tub nearby. The desperate mother immediately ran to a neighbor asking them to call 911 because her cell phone was not working at the time, and returned home again and started CPR. The EMS crew arrived within minutes and managed to restore the infant’s heartbeat. The little one was transferred to hospital for treatment, but three days later, on May 23, the boy was pronounced dead as he was presumed brain dead.

Investigators determined he’d been under CPR procedures without a heartbeat for about 45 minutes to an hour, the affidavit said as reported by the local NBC affiliate. Jimmie said her 3-year-old son knew how to clog the drain with the towel to fill the tub on his own. When investigators tested the tub, they found that when the drain wasn’t blocked, the tub wouldn’t fill past two inches. When the drain was clogged with the towel, it was filled halfway at five minutes and completely filled at ten minutes, the affidavit said.

The initial autopsy determined the boy’s cause of death was accidental drowning. In the affidavit, police said Jimmie’s “negligence resulted in the untimely death of ‘the victim.'” Jimmie is a member of the Miccosukee Tribe, which is a federally recognized tribe and sovereign government. The mother was arrested and jailed on a $10,000 bond, and is facing aggravated manslaughter of a child under 18 charges.

“It is a very sad set of events. I’m sorry for your loss,” Judge Mindy Glazer told the mother. “Make sure you stay in touch with your attorney and listen to what they tell you.”

Black woman claims her autistic son’s school would have ‘treated him right away if he was different race’ after the school nurse asked the mother to pick him up instead of calling ambulance while the teen had stroke
“It’s not your fault that you’re Black…,” White California woman was caught racially insulting 39yo African-American performer at a beach restaurant following an argument over failed payment