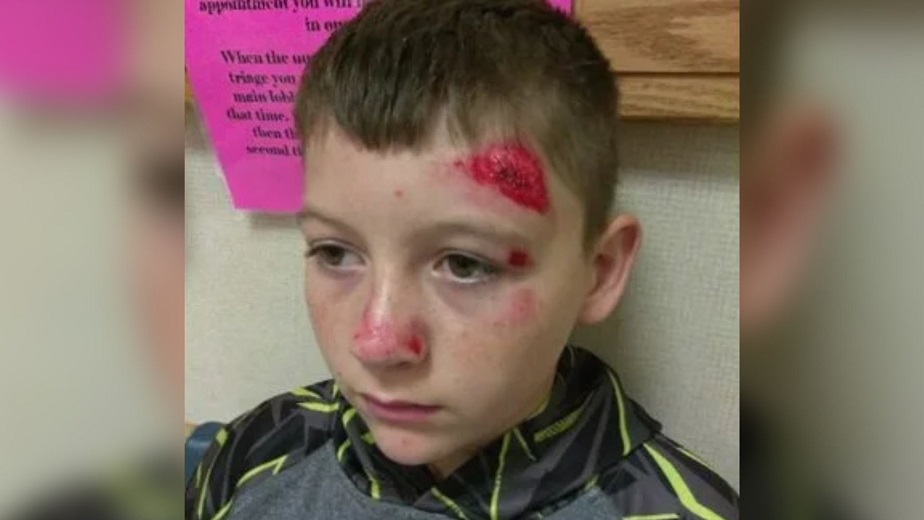 A 13-year-old boy was was released from school and sent to go home bloodied and bruised, but the school officials did not tell his mother what had actually happened.

His mother says that she got a call from the school telling her that her son had fallen and hurt himself. However, when he got home, he had a much different story.

“I found out Skyler didn’t fall,” Jennifer said. “My son was shoved by the boy who had been bullying him. The boy shoved him face first into the pavement.” According to the mother, Skyler had been getting harassed and attacked by the same bully for the last month. She says he’s been attacked by the bully five times.

“The first incident was when he poured water on my son,” Jennifer said. “In the second incident, he took my son’s cell phone. In the third incident, he spit in his face and shoved him. The fourth incident is when he repeatedly smacked my son in his face.” The mother says that the bully was removed from the bus, but that it didn’t last long. She says that just “three days later, he was back on the bus.”

Jennifer says that she has reported every incident to the school and that every time the school says “that they will handle it.” The mother says that since the bullying began, her son hasn’t been himself.

The school’s superintendent issued a statement saying, “I have been made aware of the parent’s concerns. The school system is currently investigating this situation and will address it appropriately. However, I am not able to comment on any confidential information involving a student.”

Jennifer says she will drive Skyler to school from now on to keep him from having to ride the bus and that she is even considering homeschooling as an option. After the story was shared on Facebook, many commented to voice their support for Jennifer and vent their frustrations about the ways schools handle bullying.

“Truth is, schools don’t know how to handle bullying. They really don’t take it seriously enough,” one user wrote. “They need to sit down and figure out ways to reduce bullying because schools continue to do nothing about it. Then when the kid commits suicide, they want to feel sorry. It’s a shame.” “My heart absolutely breaks for this child both as a mother and a teacher,” another reader commented. “When I taught in public schools I handled things myself in my classroom because administrators often times (in my opinion) don’t do enough. I’m so sorry you’re going through this and I pray he comes out stronger on the other side!”

We are republishing this story amid recent reports that suggest student misbehavior is on the rise across the country due to the challenges of the pandemic and its effects on student learning.

Man had been married for 20 years and raised his three sons; medical exam’s results delivered shocking news, uncovering his wife’s lies
Teenage girl teased for being overweight; a few years later, she leaves the bullies open-mouthed