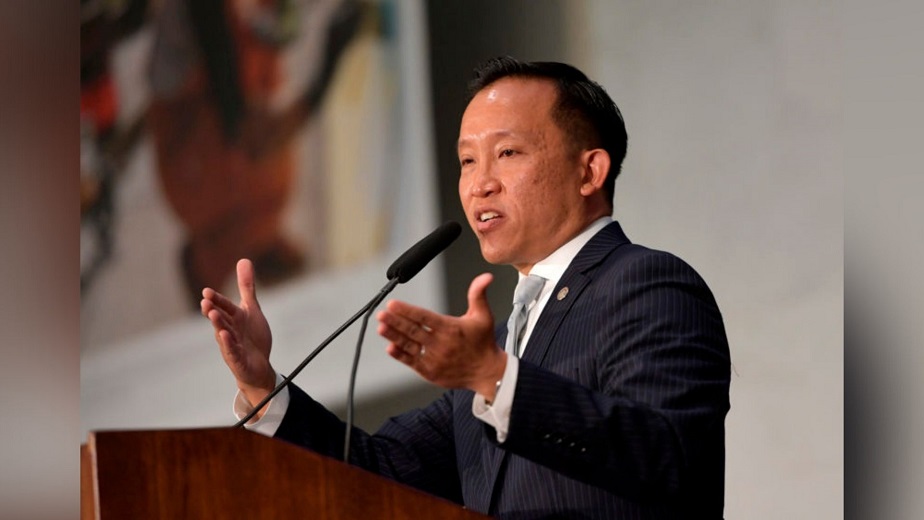 Several politicians, including California Attorney General Rob Bonta, former Mayor Willie Brown, and many supervisors, were among those in the crowd.

Chiu, a former supervisor and board president, left his most recent seat representing District 17 in the California State Assembly to take on the city attorney role as Dennis Herrera moves to head up the San Francisco Public Utilities Commission. Breed tapped Herrera to become the SFPUC general manager when Harlan Kelly resigned amid bribery allegations.

Herrera led the City Attorney’s Office for two decades, earning recognition for his strong leadership on issues like same-sex marriage, sanctuary policies and gun control. Chiu Monday paid respect to Herrera for his accomplishments over the 20 years he led “with with integrity, independence and boldness.”

The two men worked together while Chiu served on the Board of Supervisors, and competed against each other during the 2011 mayoral race. Herrera praised his successor Monday, saying:

“There is nobody more prepared to make the big play in the big game than David Chiu.”

The swearing-in ceremony kicked off with lion dancers making their way through the crowd of about 200 in the North Light Court and onto the stage as drums pounded in celebration.

Chiu, the son of Chinese immigrants, was officially sworn in with his wife at his side. He then took a moment to thank his parents who were there to witness their son make history.

He said: “My parents taught me everything about who I am, about my values. They taught me what it means to serve.”

He reflected on a pivotal moment in his freshman year of college when he decided to change majors from pre-med to law. He recounted the story of eight Asian students who were harassed at a nearby school by a group of football players who hurled racial epithets and spat on the students during a dance. The football players went unpunished, Chiu said, adding:

“That moment changed me. I was incredibly upset because those students could have been me.”

Toward the end of remarks, Chiu said: “As your next city attorney, I’m going to continue the fight for our collective civil rights because in the wake of MeToo, Black Lives Matter and anti-Asian hate, there is more work to be done.”

In addition to his work on the Board of Supervisors and as a state legislator, Chiu will draw on his experience as an attorney with the Lawyers’ Committee for Civil Rights of the San Francisco Bay Area, a criminal prosecutor for The City’s District Attorney’s Office and as a law clerk for Judge James R. Browning of the U.S Court of Appeals for the Ninth Circuit.

Breed said there was lot of pressure in replacing Herrera, but added that Chiu was the right person:

“There was no better person to step in and to do this very challenging, independent, complicated job than David Chiu.”

One person arrested, another wounded in Campbell
Numerous police officers and city employees remained unvaccinated despite the vaccination deadline