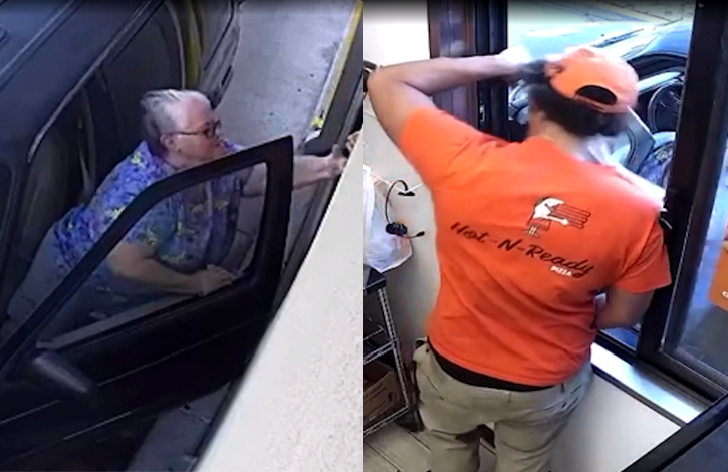 Despite all the efforts in battling racism and racist people, there are dozens of cases reported nationwide on a weekly basis, a trend that especially became notable in the last couple of months after Americans started spending more time outdoors following the winter Covid-19 wave. A video of a recent racial incident that appeared online few days ago once again shows that age definitely is not a factor when it comes to racism.

As per the BWST report, a 71-year-old woman, identified as R. Scheuerman, is facing several charges for the incident that reportedly happened on March 30 when she called young Black restaurant worker the N-word several times before she got out of her car and slapped him in the face. The attack allegedly happened after Scheuerman became angry because her favorite pizza place ran out of a menu item she wanted to order.

The victim in this incident is a teenager, a 17-year-old boy named Chris B., who was working as a drive thru cashier at a local Little Caesars store in Oklahoma. Chris that day went at the restaurant after school and nothing indicated that he will become a victim of a racial attack, but everything changed when Scheuerman drove up seeking an order of two pizzas and crazy bread.

According to the police report obtained by BWST, Chris explained to the customer the store was out of ‘crazy bread’, something which immediately angered the woman. “Are you serious?” The woman reportedly responded. Chris told her that if she pulled up to the window, he would still be able to give her the two pizzas she requested.

That’s the moment when the woman pulled around to the window and asked the young boy if he ‘wanted a diploma’ and the boy responded ‘yes’. Then, according to the incident report, the woman said to the boy, “Listen here, N-word.” The boy couldn’t believe what the woman was saying and he reportedly responded “What?”.

The elderly woman then continued with the racial slurs using the N-word several times more, before she asked the boy if what she was saying was hurting him. The boy simply responded ‘no’ and that’s when Scheuerman got out of her car, stepped up to the window, and slapped Chris two times across his face.

According to Newsweek, the store’s manager asked Scheuerman what had happened directly after, to which the woman replied, “I harassed him like I always do.” The manager told her that her actions were not OK, and the report states the woman laughed and drove away. The teenager was left in complete disbelief and traumatized.

“He’s shocked and he’s traumatized,” said teenager’s attorney Ronald “Skip” Kelly. “To intimidate and traumatize a child is about as low as you can go.” “They didn’t have any of the crazy bread,” Kelly added. “She just kind of went foul about the whole issue.”

“This young man did the best that he could do to control himself and wait until he got home to tell his parents what had happened to him,” said Kelly. “What was more painful to him was the fact that it took so long for anything to be addressed in reference to this,” said Kelly.

Scheuerman was reportedly charged with a “malicious harassment based upon race” misdemeanor two weeks after the incident and could face up to one year in prison and a fine of $1,000. The video of the incident was brought to the light of the day few days ago for the first time even though the local police department already had it as evidence for weeks.

3-year-old girl, who was born premature with a rare heart condition and spent most of her life in hospital, finally goes home as her mother wins years long legal battle against the hospital
63-year-old elementary school special educator is accused of letting female student to sit on his lap before he started to touch her inappropriately and asked her if she liked it, charged