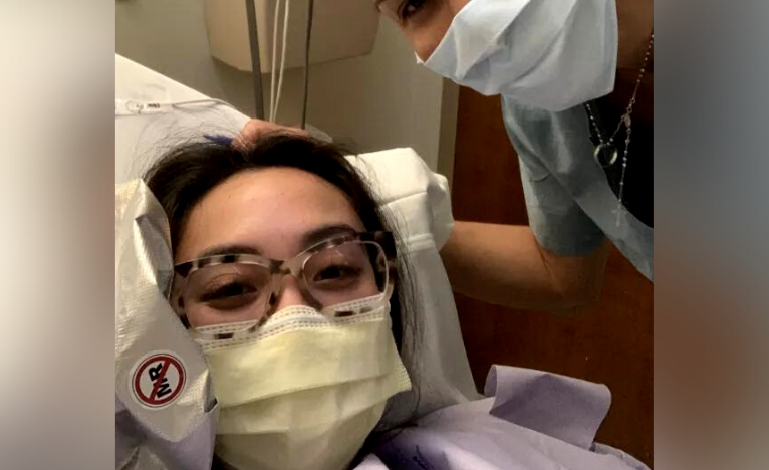 Regular medical checkups are very important when it comes to everyone’s health as doctors can identify any early signs of health issues which can be treated on time and prevent further health complications. People are advised to perform these routine checkups once a year, while those who suffer chronic disease, like diabetes or COPD for instance, should visit doctor more frequently no matter of the patient’s age.

Since the start of the pandemic more than two years ago, many hospitals focused on treating as many Covid-ill patients as possible, causing a lot of people to postpone or cancel their routine checkups which exposed them to greater health risk. Fortunately, America is now in a calmer Covid period allowing hospitals to treat more non-Covid-ill patients.

The 24-year-old N. Burke, a young woman describing herself as “extremely healthy” and with no previous medical history, urges everyone to visit their doctors as frequently as possible and prevent serious health problems in the future after she was diagnosed with very rare type of ovarian cancer claiming the only symptom she experienced was bloating.

In August 2020, Burke already felt some bloating-like symptoms, and her primary care physician told her to improve her diet and to start exercise more. During Burke’s regular annual checkup, her doctor thought the bloating-like symptoms will be soon gone having in mind her age and previous health condition, but for precaution, the doctor ordered a pelvic ultrasound for Burke just to be safe, although she was in no rush to undergo the scan.

“I did not feel like it was necessary to go and pay for an ultrasound. I had no pain or any symptoms or anything out of the ordinary,” Burke said in an interview with Newsweek few days ago. Toward the end of 2020, Burke’s bloating started to worsen to the point where she said she looked “big all the time” despite a lack of other symptoms or pain.

According to Burke, she experienced the first serious bloating symptoms in November, 2020, but she was not concerned at all thinking that the bloating was happening due to her bad eating habits. Taking into consideration the fact she was completely healthy and with no medical history up to that point, she thought the bloating will go away once she improves her diet and her everyday habits.

Burke eventually underwent the ultrasound in January, 2021 and she was subsequently told by her primary care physician over the phone that she had an ectopic pregnancy—a condition in which a fertilized egg implants itself outside of the womb, usually in one of the fallopian tubes. The woman was told that she had a 16-week-old fetus with no heartbeat.

Obviously surprised by the ultrasound results, Burke couldn’t even believe what was actually happening in her body. Stunned, speechless and heartbroken, she was informed by her doctor that she has to be immediately hospitalized and undergo an emergency surgery because every movement might result in serious life-threatening bleeding. Several doctors tried to diagnose what was going on, but she left the hospital that day not knowing what was inside her body.

Shortly after, Florida based specialist in obstetrics & gynecology Dr. Diana English took over her case and informed Burke she had a mass inside of her that might burst any moment causing a lot of bleeding. The seven-pound mass connected to one of her ovaries, the ovary in question, as well as a Fallopian tube and her appendix were removed during the emergency surgery.

The mass was sent for analysis and a few weeks later, Dr. English revealed to Burke that she had mucinous ovarian cancer (MOC)—a rare subtype of ovarian cancer developed in only two-three percent of the cases. Fortunately, everything with cancer cells had been removed during the surgery and she was not required to undergo chemo or radiation therapy.

“I’m so grateful that it turned out this way,” Burke said. “Many women who have ovarian cancer catch it too late. That is unfortunately the truth about this cancer. It acts fast and silent,” she added. Burke now encourages everyone to visit their primary doctor as frequent as possible to prevent further health complications.

Substitute high school gay professor fired for supporting LGBTQ+ rights because he was explaining why ‘he is wearing his rainbow wristband to students’
Black delivery driver with no criminal record claims he was unlawfully pulled over and had his hands in the air when the officer hit him with a stun gun for no apparent reason, cell phone video shows