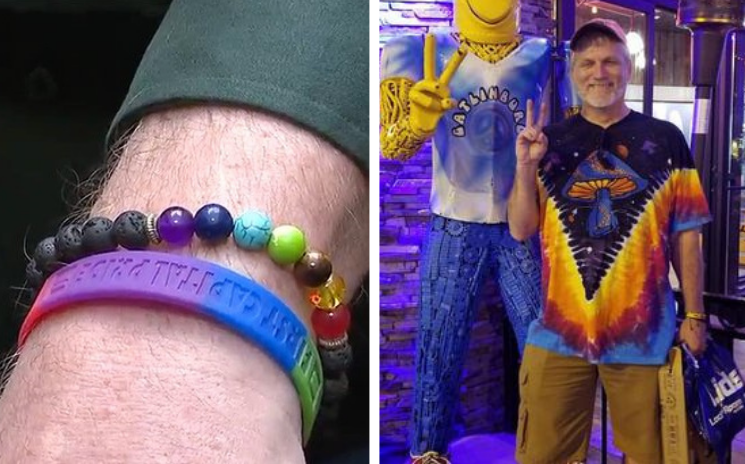 Few days ago, hundreds of people, including his colleagues, students and parents of students gathered to protest against the school’s decision to fire the substitute high school professor for violating the “religious and political topics” policy after the school board was informed that the gay professor had been explaining to his students why he was wearing his rainbow pride bracelet.

The protest against the firing of the beloved professor Jay Bowman comes as schools across the United States grapple with the inclusion of the LGBTQ community, an issue that rose to national prominence after Fl. enacted a law—known as “Don’t Say Gay” legislation—that advocates argued would ban discussion of LGBTQ people in classrooms.

According to the Scioto Valley Guardian, Bowman said his dismissal came after complaints about a conversation he had with students regarding a wristband that was rainbow-colored and bore the name of a local LGBTQ+ advocacy group — First Capital Pride — on it. At the time of the incident, Bowman, who has been teaching for over 30 years, was a substitute teacher in H. L. High School in Ohio.

Several students asked their teacher about his bracelet and he reportedly told them that First Capital Pride “offered support groups for teens who may be struggling, are suicidal, are ostracized, and need support.” That’s the moment when the teacher took off and decided to give the bracelet to a student. But this gesture was apparently against the school’s policy, at least that’s what officials with the school district say, and it was later confirmed by the school superintendent that Bowman was fired.

Under pressure from Bowman’s colleagues, students and parents of students, the school superintendent was forced to issue an official statement after refusing to speak publicly to WSYX-TV. As per the statement, Bowman “violated board policies by speaking to students about political and religious topics, as well as distributing bracelets. As a result of his violation of board policies, the district decided his services as a substitute would no longer be utilized. While we recognize there are diverse points of view on this matter, this policy exists for the purpose of ensuring all students feel comfortable in the classroom.”

Speaking to WSYX-TV, Bowman claims he didn’t try “to recruit anyone” and he feels obligated to provide his students with more information when asked about anything. “If a kid has questions. If a kid wants honesty, I don’t think I should be forbidden from providing that,” said Bowman. According to Bowman, only the students’ parents are responsible for their children and they should teach them what is right and what is wrong.

“I know I have opened a can of worms. I know I started a discussion. I trust the members of this community know I did that with no ill intent,” Bowman added. “We are saying that it is not okay to be out. It’s not okay to be gay or queer or LGBTQ. Or if you are out about there will be consequences,” Daniel Matthews, with First Capital PRIDE, said.

Man was rejected to board on his flight home because he ‘put on some weight’ since his passport photo was taken and didn’t match the picture, dies after missing life-saving treatment
Extremely healthy young woman with no previous medical history thought experiencing bloating for more than a year was due to her bad eating habits until she was diagnosed with very rare ovarian cancer