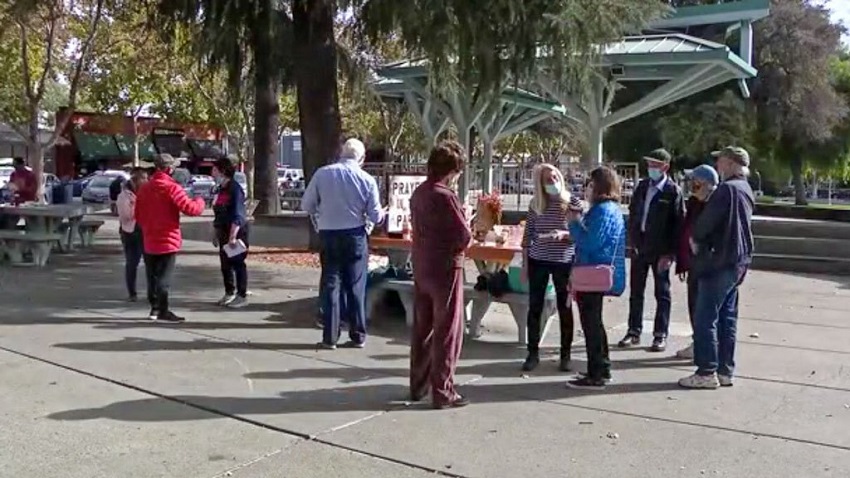 Concord, California – At Todos Santos Plaza in Concord, there were no wild celebrations or angry protests. It was a good place to go to get a thoughtful reaction to Saturday morning’s election news.

While others danced in Times Square or outside the White House, in Concord there was simply a feeling of relief for Shannon Zuvellavega.

“It felt like we’ve been holding our breath for, like, the last four years,” she said, “so it just feels nice.”

She sat with fellow Biden supporters who have been on edge since Election Day.

“That was the longest Tuesday of my entire life so I’m glad it’s over,” said Biden supporter Tawny Bourgue.

“I was very relieved to know … that our country is going to get better, hopefully,” said Juliette Lusca, a 16-year-old Biden supporter.

Even though the legal battles may be just beginning, Torian Allen of Concord thinks it’s helpful to have someone declared the winner.

“I mean, it’s so good to get past this decision,” he said, “because I feel like a lot of people … it’s like closure, maybe, for a lot of folks, for people who are either for or against Trump or Biden being in there.”

Dan Reimer voted for Donald Trump and thinks he still has work to do for the country. An avowedly religious man, Dan said he’s willing to trust in a higher power.

“I believe there will be victory,” he said. “If there is not victory, I believe God is still in control. He puts leaders into authority, he takes leaders down.”

Frederick Layacan is a Trump voter who changed his mind and switched to Biden after seeing the president’s behavior during the first debate.

“I supported Trump during his first election and knowing what he could bring to this country and these great things that he did … but he brought so much controversy and so much — just a lot of things that’s not politics that came to his name,” Layacan said.

Tony Pecci said he’s comfortable with whoever is president but he thinks Donald Trump’s unconventional behavior may have done the country a favor by forcing people to rethink how and why they vote.

The outcome may not be a matter of agreement yet but it’s clear that a record number of voters paid attention to this election.