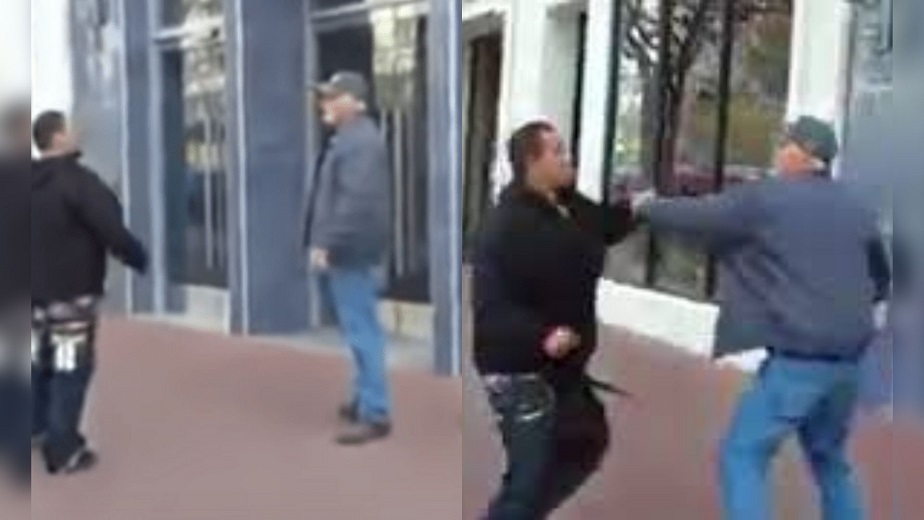 A shocking video shows that a man who tried to attack an old man got a rude awakening right away. Sometimes, a video will go viral on social media, and many people will be shocked by what they see.

The most recent one is a video of a middle-aged man who thought it would be fun to attack an older man but got a very bad surprise instead. In the video, an old man is seen standing outside a shopping center with a bag next to him. After dropping his backpack on the ground, a man in a black hoodie and baggy jeans is seen coming up to the older man in an angry way. The man filming the attack, who seems to be the attacker’s friend, can be heard saying, “Oh, you’re going after him,” after the older man tells the attacker, “I’ll hurt you.”

As the younger man puts his fists up and swings at the older man several times, things get more violent. But the old man shows that he is more than up to the task. As he keeps saying, “I’m going to hurt you,” he swings hard at the attacker and knocks him out with just one punch. He picks up his bag and leaves. The person taking the video can be heard telling his friend, “Oh, you got knocked the f**k out, boy.” “Blown the f**k away.” The video quickly went viral. In less than a week, hundreds of thousands of people watched it. People who watched the video said what they thought about it on Facebook.

“You punks should be very careful when you start picking on and harassing older people,” said one user. “There’s no way to know what war they fought in or where they came from. A lot of us still remember how to do things or can still take care of ourselves. Also, know who might have a license to carry a gun in a concealed manner. Just saying, easy pickings may not be so easy!” “WAY TO GO,” wrote someone else. “My dad once told me, “Never underestimate an older man. They didn’t get old by being stupid.” GOOD LUCK, my Brother. And, dude, get a job and pick up your pants, because you look RIDICULOUS!” “Men and women of the past were taught to be strong,” said another user. “No snowflakes, we stood up when a bully came up. We may have gotten our asses kicked, but we kept our respect and pride.” We are republishing this story amid recent reports of a surge in violent confrontations between Americans going about their daily lives during the pandemic.

Police arrested a couple; what they were doing to their adopted children and recording their acts enraged many
Man abused and held his wife captive at gunpoint; UPS driver notices a note on a package and realizes he needs to take action immediately