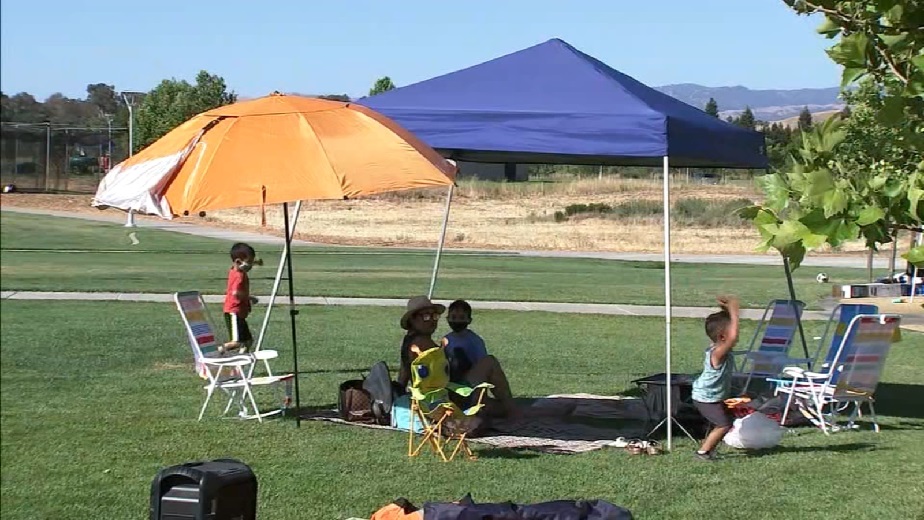 San Francisco, California – Temperatures climbed during Memorial Day afternoon, with a number of North and East Bay counties under a heat advisory and the entire Bay Area under a Spare the Air alert.

The National Weather Service predicts clear skies and temperatures considerably above normal for the San Francisco Bay Area on Monday, with highs in the 70s near the coast, the 80s and 90s around the bay, and up to 103 in the north bay and interior valleys.

The advisory impacts a majority of Marin, Sonoma and Napa counties as well as parts of Contra Costa, Alameda and Santa Clara counties. Additionally, Solano County will be under a more extreme excessive heat watch that will cover more counties to the east of the immediate Bay Area.

“This alert highlights the need to reduce our driving and keep air quality healthy by finding alternatives to driving alone such as taking transit or walking or biking,” Broadbent said.

The air alerts are issued when ozone pollution is forecast to reach unhealthy levels. Ozone, or smog, can cause throat irritation, congestion, chest pain, trigger asthma, inflame the lining of the lungs and worsen bronchitis and emphysema, air officials said.

The understatement of the day goes to John Azinheira in Concord.

John and his dog Posey were playing in the shade, chasing squirrels and staying on the grass as temperatures soared to the triple digits – taking extra care during walks.

“Especially, the black top. We’ll touch it first. If it hurts us, it’ll hurt her so we won’t put her down.”

Across the park, charcoal briquets were flaming, while there wasn’t enough of a breeze to fly a kite with any measure of success.

Cooling centers were open all over Contra Costa County, as folks hit the pool, by reservation only to beat the heat.

“You have to – 5 o’clock on Wednesdays, we’re at the computer, trying to get time for the following week and whatnot,” said swimmer Paige McDaniel.

While it’s not a thermometer, you can often gauge the heat index by the line for ice cream in Walnut Creek. On Monday, it stretched down the block at Lottie’s Creamery.

“I’ll be getting their mint chip in a cone because it’s super good here. It’s very refreshing for a hot day,” said Maya Kramer.

Temperatures are forecast to rise much higher further inland, particularly in the areas of Yuba City, Grass Valley, Clear Lake and Chico.

The Bay Area heat advisory is in effect until 9 p.m. Monday for the north bay and east bay regions of the Bay Area. Overnight lows are expected to be in the mid 50s.

Blasts of extreme heat generally puts strains on the state power grid. Officials said that would not be the case on Memorial Day.

There’s enough electricity to serve the expected spike in demand, California Independent System Operator said in a statement Saturday, but it will monitor the grid closely in case it needs to call on the public to conserve.

ISO has said the state is better prepared to avoid last summer’s rotating blackouts. However, they cautioned the power grid of the nation’s most populous state is still vulnerable to extreme heat waves that could force more outages.

The heat gradually eases Tuesday and temperatures return to near normal by Wednesday through the end of the week.