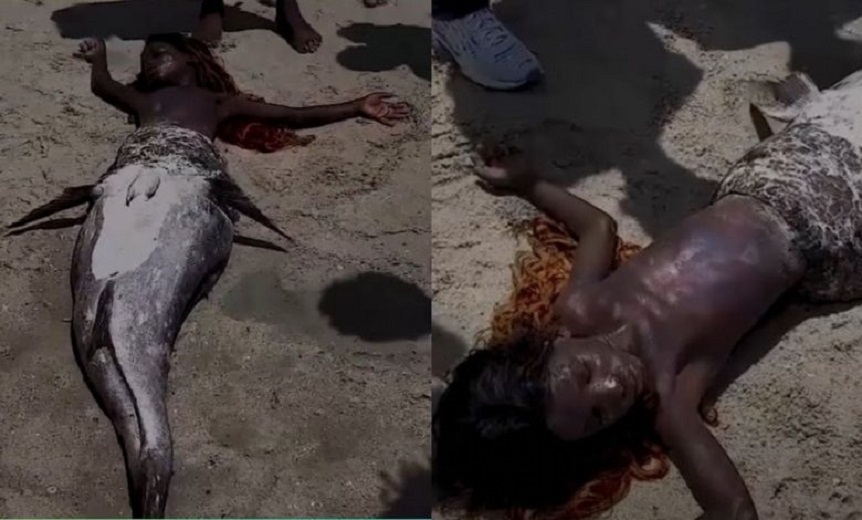 Many people don’t believe when they hear about supposed sightings of mermaids, but these rumors keep going around the world and split the public’s opinion.

Sailors have been saying for a long time that they have seen mermaids, but since there is no solid proof, the fishy stories have been put down to myth, legend, and drunken misunderstandings.

Even though experts in this field, such as marine scientists and oceanographers, have not been able to definitively prove the existence of merpeople, an odd video about an alleged mermaid sighting that went viral on social media is dividing opinions among the public, with one group saying the video seems real, and the other claiming it must be fake.

The video that has gone viral on many social media networks and was published by multiple news sources shows a “mermaid” that seems to be alive and washed ashore on the coasts of Kenya several months ago.

The bizarre video shows what seems to be a creature that is half human and half fish, and it is seen lying on a sandy beach as others gather around to observe the mysterious sea creature.

The movement that can be seen on the video indicates that it is, in fact, still alive. On the other hand, no one on the beach makes an effort to relocate the mysterious sea creature back into the ocean, which is why many believe the video is fake.

The video has been viewed over 8 million times since its initial publication on social media.

“I’m like 50/50, but honestly, it looks more like a fish was trying to eat the girl. If it was a mermaid, don’t you think they would try to flip it over and see what’s in the back of her body? Every person would get curious and try to see everything about it. I can’t also say it’s fake because I wasn’t there, but I’m curious now,” one YouTube user commented.

“I appreciate the effort they put into making it. Looks 10 percent real,” another user weighed in.

“Look at the radiation emitting from her chest. 100% real,” a true believer commented.

You can view the video here.

Mother sets up camera to find out why she is always tired; reviews the footage and is astounded by what she sees
Nurse puts baby next to dying twin to say goodbye; five minutes later a miracle happens