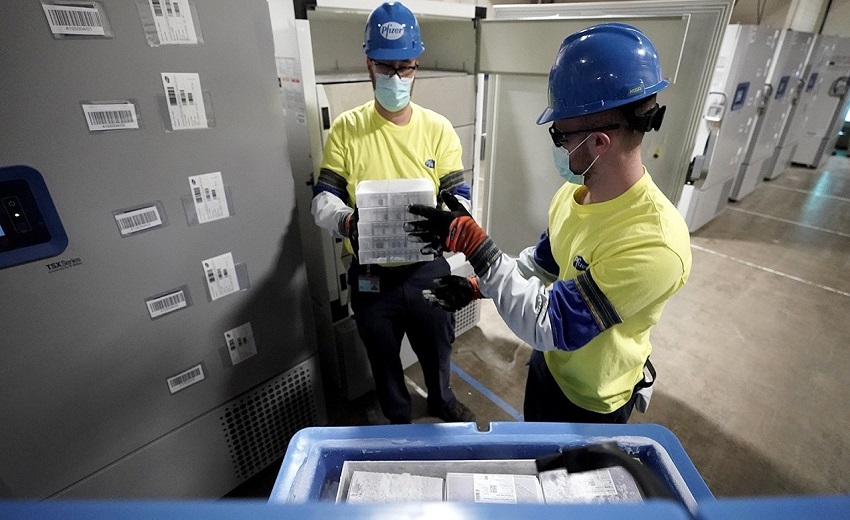 San Francisco, California – While the initial shipment of Pfizer COVID-19 vaccine to San Francisco Bay Area hospitals was being distributed and administered to front line health care workers Tuesday, state health officials got more encouraging news from the pharmaceutical giant — a second shipment of 393,000 doses will arrive next week.

“Some good news, we just got word from Pfizer that we are going to receive an additional 393,000 doses of their vaccine next week,” Newsom said. “So, first vaccines out to 4 locations in the state today (Monday) — San Diego, Los Angeles, Eureka and San Francisco. 24 additional locations will have distribution of vaccine tomorrow (Tuesday) and five more on Wednesday.”

A batch of 2,000 doses of Pfizer/BioNTech’s COVID-19 vaccine arrived at Zuckerberg San Francisco General Hospital on Monday with other San Francisco hospitals expected delivery over the next few days.

SF General staffers would begin getting vaccinations on Tuesday morning.

While the vaccine carries with it future hopes in the battle against the virus, Colfax said residents can’t lose sight of the current dire situation unfolding within San Francisco.

“It will be a long (vaccine) rollout and too late for this surge,” he said.

Currently, San Francisco is grouped with hospitals in other Bay Area counties into one of five COVID ICU regions in the state. As of Monday, the availability of ICU beds had dropped from around 25 percent to 17.8 percent in just one week.

While those numbers are alarming, they are not as bad as in other regions. Colfax said the greater Sacramento region had 14.8 percent, the Southern California region which includes San Diego and Los Angeles had just 2.7 percent and there were no available ICU beds in the San Joaquin Valley region.

Colfax said there were currently at least 2,807 active cases of COVID-19 among the residents of San Francisco. There were 148 COVID patients hospitalized in San Francisco, 37 of those are in intensive care.

And the feared Thanksgiving surge was underway. New cases have increased by 50 percent after Thanksgiving and over last week an average of 200 people have tested positive each day.

“With so much virus out there, you are not going to get away with any bad behavior,” he said.

Colfax warned that with hospitalizations lagging about two weeks behind infections. San Francisco will run out of ICU beds in the next 3-4 weeks.