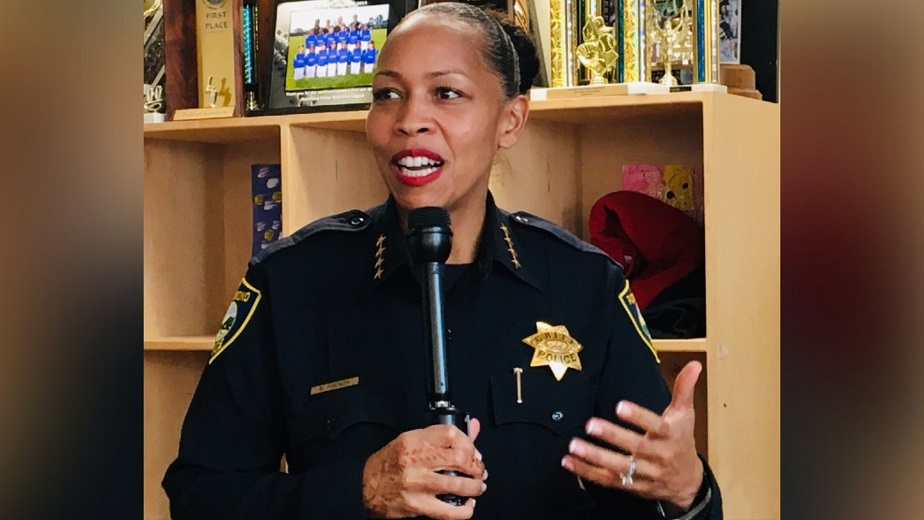 Richmond, California – The chief of police in Richmond has been placed on administrative leave, as has her husband, an Oakland Police sergeant, due to a “family situation,” according to the department.

An 18-year-old family member has accused Richmond Police Chief Bisa French and her husband, Oakland Police Sgt. Lee French, of abuse. According to the Bay Area News Group, a family member claims that the Frenches assaulted and threatened to kill her as well as her 34-year-old boyfriend, Joe Goldman of Napa County, who also goes by the name Oho McNair.

An investigation has reportedly been launched in Vallejo over an incident involving the Frenches at the home of Goldman’s mother, in Vallejo.

The Frenches claim that Goldman is the 18-year-old woman’s pimp, and that she is being manipulated by him.

The young woman has filed a restraining order against the Frenches, and claims that on September 21, at their home, Bisa and Lee French used “police holds” to pin the young woman down, and threatened her and Goldman.

The woman claims she left their house “swollen and bleeding” with some minor injuries, but she said she thought she “would not leave their house alive” if she didn’t comply with the Frenches’ demand that she separate herself from Goldman.

Goldman’s mother, a resident of Solano County, also claims that the Frenches came to her home and threatened her, and that is now being investigated.

An attorney for the Frenches countered that the couple “wanted nothing other than to get [the young woman] back and get her away from this despicable human being and [they] have made lawful efforts to achieve that.”

The restraining order request was temporarily denied, and a Contra Costa Superior Court judge said that the issues presented were complex enough to warrant a hearing, which is scheduled for October 25.

There appear to be drugs involved as well. As Bay Area News Group reports, a probable cause declaration against Goldman suggests that the young woman has admitted to an Oakland police officer that Goldman is her pimp, but she said she was not being trafficked. The woman had reportedly agreed to enter a treatment program of some kind, out of state, but escaped five days later.

Goldman was arrested on the 500 block of Berk Avenue in Richmond on Monday, and the young woman was reportedly with him at the time.

As Richmond Confidential reports, the City of Richmond has confirmed that Chief Bisa French is on leave due to “an unfolding family situation.”

“It’s imperative that we let the investigations play out without distraction and in accordance with established protocols that assure an objective assessment of the facts,” said City Manager Laura Snideman in a statement.

Richmond’s Assistant Police Chief Louie Tirona has been placed in the role of Acting Chief.

Bisa French was named Richmond’s first female chief of police in July 2020, after rising through the ranks in the department since 1998. Richmond Mayor Tom Butt said in his weekly newsletter that he’d been informed of French’s leave last Friday, by Sniderman, and that she was “unexpectedly taking personal leave to address a distressing family situation.”

Butt added, “There is a world of difference between ‘taking personal leave’ and being ‘placed on administrative leave,'” reiterating that Bisa French has not been found guilty of anything.

An attorney for Bisa French, Mike Rains, tells Bay Area News Group, “These allegations are simply the product of the brainwashing that’s occurred by this horrible man who has trafficked [their young family member]. That’s what we’re dealing with.”

He said the Frenches were fully cooperating with the investigations, and that they would not be commenting publicly until they are complete.