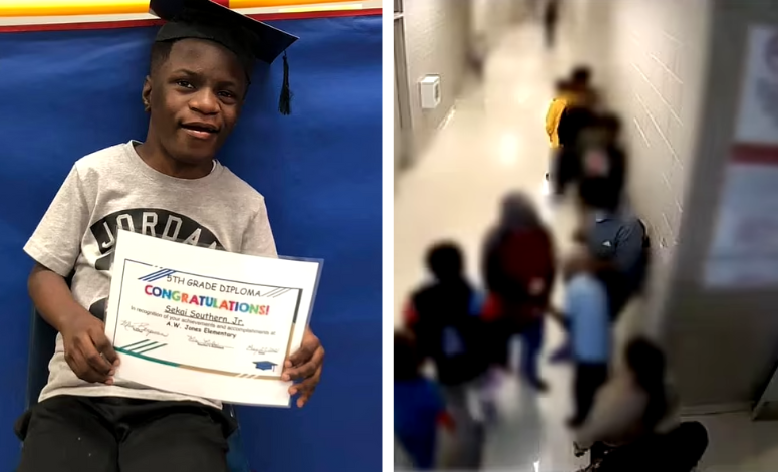 School officials, teachers and principals are doing everything in their power to prevent incidents in schools like fights between students or arguments between teachers and students in an effort to make schools safe environment for everyone. However, despite all the efforts, different types of incidents happen in schools nationwide on a daily basis where students end up injured.

In most of the cases all the above work perfectly fine, but that was not the case when a 11-year-old non-verbal autistic student was beaten by another student in the school’s hallway in front of several school employees and they did nothing to prevent the incident, a recently shared video online shows.

According to KHOU, three school employees with the AISD in Texas were at the hallway at the time when the beating incident took place and once the video appeared online, all three of them were fired because they didn’t take proper action which would have prevented the beating of the non-verbal autistic student.

The video appeared online last week after the victim’s grandmother, who was obviously furious about the beating, decided to share the video with the public in an effort to raise awareness and prevent similar incidents in the future, while she called the school and the school district to take actions against the school employees seen in the hallway.

Two days later, all three of the school employees were immediately fired because they didn’t take proper action in the incident the district described as “sad and deeply concerning.” In the statement, the district said the boy involved is a special needs student and that employees are trained “in nonviolent crisis intervention techniques.”

“Those adults in that video stood there. They did not attempt to help my child get up off the ground. They did not offer him any assistance. They didn’t even check to see if he was injured,” the grandmother of the 11-year-old boy, Veda Cavitt said.

The video shows a boy in a blue shirt getting pushed to the ground, and then a person in a gray shirt taking swings at him. Seconds later, the boy in the blue appears to be crawling before he starts getting kicked.

In the video, which was released by Cavitt and local advocates last Tuesday, the 11-year-old boy called Sekai is seen accidentally bumping into the other student in line. The video then shows that student pushing Sekai to the ground and kicking him while he’s down. When Sekai gets back on his feet, the student is seen in the video punching him until he falls again. One adult is seen tapping the attacker on the shoulder as Sekai crawls on the ground and is kicked by the student several more times.

Sekai reportedly has the intellectual capacity of a 4- or 5-year-old. Even if he wanted to defend himself, he definitely couldn’t make it against the aggressive student who was the same age as him, 11 years old. The incident happened at the end of January and Sekai’s family had it in their possession for some time until they finally decided to share the video with everyone last week.

“How can other special needs mothers send their children back to this school knowing the same paraprofessionals are standing in the same classrooms,” advocate Quanell X told KHOU.

“He couldn’t walk. He couldn’t eat…” Seven-year-old spent more than a month in hospital fighting rare Covid related disease, expected to recover
Stubborn girl in ‘perfect health’ refused to get the Covid-19 vaccine because she felt young and strong, contracted the virus and died, her family speaks out