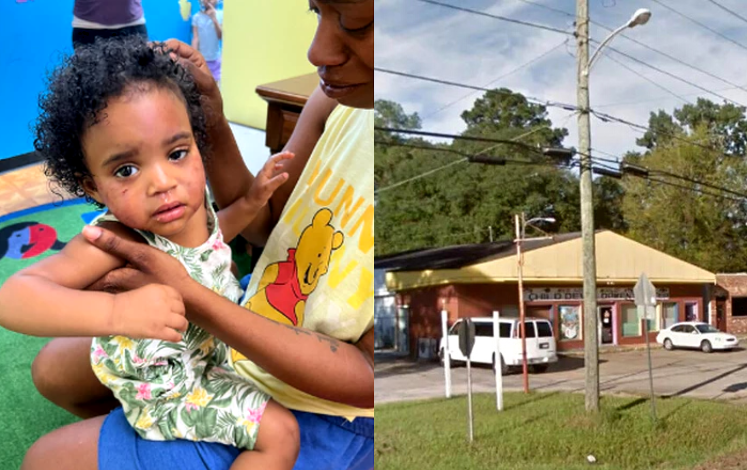 The single mother of the 1-year-old girl, who suffered several injuries including bruises and bite marks following an attack while she was at a daycare, decided to speak publicly in an effort to raise awareness and is contemplating taking legal action against the daycare workers because they failed to protect the toddler.

The incident, that reportedly happened late April, left the local community and the parents of other children nothing but devastated questioning their children’s safety while in the care of the daycare workers. The attack took place at the Va. based daycare called Wee Are the World Child Development Center on April 28 and the incident was initially reported few days later when the victim’s single parent decided to speak publicly to a local tv station.

April Robinson, the mother of the 1-year-old Gabriella, and family relatives confirmed they reported the incident to the local authorities after Gabriella suffered several injuries including bruises and bite marks. Per the daycare worker’s claims, a 5-year-old boy held the 1-year-old Gabriella down, bit, and scratched her several times on her face and body inside the facility.

Following the attack, the toddler was taken to hospital for treatment where her mother and aunts took photos and filed those photos as evidence when they reported the incident. Per the initial police report, investigators were allegedly told by a daycare worker that ‘she was changing another child’s diaper when she heard Gabriella scream and then saw the boy attacking her.’

The mother and the girl’s aunts were shocked and speechless when they initially saw the injuries the little girl suffered in the attack. Taking into consideration the seriousness of the injuries, they are questioning ‘how this could have happened in such a short amount of time, or with an adult in the room.’ Fortunately, the girl received proper treatment in hospital and is expected to fully recover.

According to April, she never wanted to put the toddler in daycare, but she had no options left since she is a single mother. Just like any other parent, April expected her daughter to be safe while at the daycare and understandably, she is traumatized following the incident.

“Once I got there on the scene. I couldn’t grab her. I couldn’t even grab to say ‘you know mama here, I got you’ or anything because she doesn’t even look the same,” said April.

Once the incident gained a lot of public attention, the daycare facility, Wee Are the World Child Development Center, issued an official statement:

“We are truly sorry about the incident that happened on April 28, 2022, Wee Are The World Child Development Center considers safety of the children in our care top priority. It is why we have been privileged to provide child care for more than three decades. we have contacted Bright From the Start and we are reverring all policies and procedures, we will take whatever steps to prevent this rare but serious matter from happening again while there is established protocol to address occasional biting behavior common to many toddlers, the severity of the incident demanded a more appropriate response. Wee Are The World Child Development Center is following internal policies and procedures as well as licensing regulations and employment law requirements throughout this investigative process. And again We apologize profusely for all parties involved.”

The investigators and the daycare officials confirmed there are no cameras inside the facility. At this point, April is not sure if she will be moving forward with a legal action, but it’s something she might consider in the future.

Fully vaccinated young woman, previously told by her doctor not to get the third Covid-19 vaccine due to possible adverse medical effects, claims she was expelled from university for not being boosted
Young Black boy, who was called the N-word by White teenagers and had ‘White Lives MATTER’ written on his head while he was unconscious at a party, speaks about the incident and seeks justice