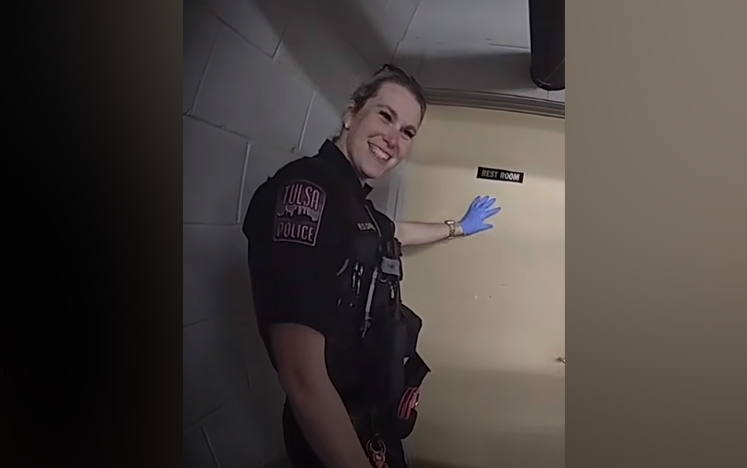 Black elderly woman is about to file a lawsuit against the local police department and the responding officers for the incident that happened last fall when she was brutally arrested causing her to suffer several injuries. The law firm representing the victim in this case says she “was taunted, harassed and antagonized by the officers before they brutalized her while placing her under arrest for behavioral manifestations of a mental health disorder.”

According to multiple reports, the incident happened last October when the 70-year-old L. J. Paris, locked herself in a bathroom while apparently experiencing a manic episode associated with mental illness. At the time, Paris was at Habitat for Humanity ReStore in Oklahoma and local police arrived after an Emergency Medical Service worker called them for assistance.

Officer Ronni Carrocia was among the responding officers who arrived to the scene that day and she is clearly shown on the recently released body cam video harassing Paris, at least that’s what Paris’ representatives say. The video released by the TPD shows officer Carrocia banging on a bathroom door as she laughed and told one of her colleagues: ‘This is going to be fun.’

Then, she started threatening Paris with a Taser, as she asks, ‘Do you want to get Tased?’ to which Paris can be heard saying: ‘Don’t do it. Why are you doing this?’ Paris can also be heard pleading with Carrocia, saying: ‘Get away from me, get away, get away’ after she rattled the door. In response, Carrocia laughs and tells one of her colleagues: ‘I love my job.’ Soon, Paris can be heard saying, ‘The cops are trying to kill me here.’

Few minutes later, a third officer arrived to the scene and he broke the door. That’s the moment when the officers tackled Paris to the ground in an aggressive way. As they get her to stand up, a gash on the side of her face is visible, with cops remarking that they had to clean up the blood from the ground. The video ends shortly after as officers took Paris into custody as Carrocia is heard saying ‘If you are going to play stupid games, you are going to win stupid prizes.

The video sparked a lot of the debate and the police department was forced to issue a statement regarding the incident. The two-page statement which was released recently, months after the incident, the department believes the responding officers handled the situation within the department’s policies, although it was noted that their communications with each other could be ‘perceived as unprofessional.’

The statement from the department also stated that responding officers did a great job when they decided not to use Taser when they noticed ‘that Paris had been spraying an aerosol can and had a lighter’ and called for a third officer to assist. In addition, the statement claims Carrocia ‘activated her Taser to make an arc sound hoping that that auditory stimulus would prompt Paris to open the door.’

Per the statement, ‘Paris did sustain a minor injury to her face when officers were taking her into custody on the floor of the bathroom.’ Still, police say, she continued to resist arrest and kicked one of the officers as she was brought to the jail. Paris faced several charges and spent nearly a month in jail, but her case was dismissed late November taking into consideration her mental health and ‘in the interest of justice and civil diversion.’

The law firm representing Paris said in a statement they are about to seek justice for Paris and will do everything in their power to find the responding officers and the local police department accountable for their shameful and unlawful, discriminatory actions.

Black delivery driver with no criminal record claims he was unlawfully pulled over and had his hands in the air when the officer hit him with a stun gun for no apparent reason, cell phone video shows
Instead of pain reliever to treat tooth pain, teenager was delivered counterfeit pill with fentanyl from a dealer he met online and died due to poisoning; his mother speaks out to raise awareness