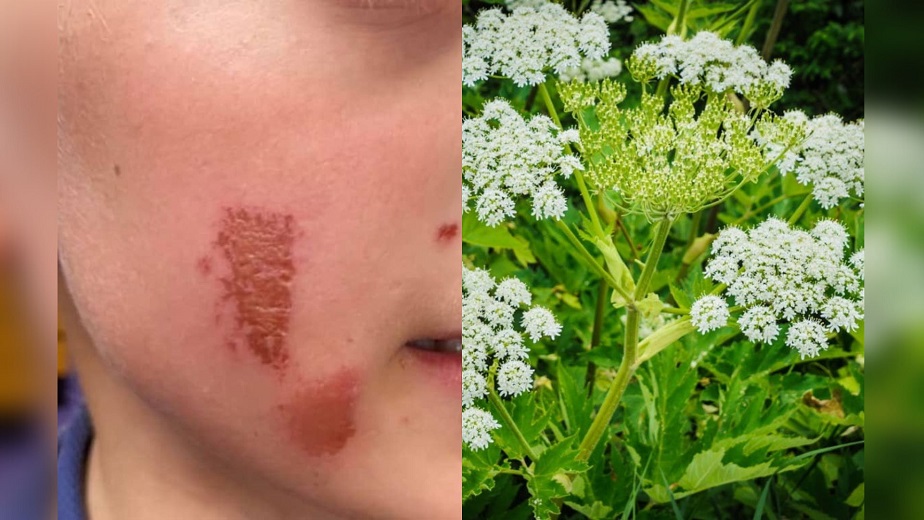 Parents are doing everything they can to protect their children, but surely most of them did not expect that there are many dangerous and poisonous plants that can cause injuries to their loved ones. That is the reason why this mother is now warning other parents.

When the mother found out that her son’s burns were caused by a poisonous plant, she was shocked.

Kimberley took her son to the emergency room when he woke up with burns on his face and hands, but doctors said it was only a ‘nettle sting’ mark.

Since that time, the burns that were on her kid’s hand had doubled in size, which prompted both Kimberley and her doctor to suspect that her son had come into contact with a Giant Hogweed plant. When it comes into contact with human skin, Giant Hogweed may secrete a toxic sap that can cause severe burning, skin damage, and even blindness. A plastic surgeon treated Kimberley’s son for his burns.

Kimberley described the incident, saying her son returned from school over a month ago with a mark on his hand that looked like an oven burn.

“I asked him what it was, but he didn’t know how he’d done it. I took him to hospital, and they said he’d got a nettle sting. But I didn’t understand how he could burn his hand from a nettle. We’ve been treating that ever since and he still has a scar on his hand now,” she said.

Kimberley revealed that the burn had only appeared on her son’s hand up until a week ago, when he awoke with two more burn scars on his cheek.

“I asked what he’d been doing, but he didn’t know what was causing them. He went to school and then at 11am I had a phone call from school saying the burns had doubled in size.”

Kimberley was eventually called by a doctor who informed her that he had discussed the wounds with a colleague at the hospital who specialized in plastic surgery. This specialist had cautioned the doctor that the burns “can scar and cause blindness.”

“We went to see the plastic surgeon last Tuesday and he thinks that one of the burns will heal, but another one is deeper. He dressed the burns and gave us an ointment to put on twice a day, and we’ve got to go back this week. Then last Wednesday, I had another phone call from school saying that my son had some redness under his eye. We got up the next morning and there was another burn, right under his eye,” she added.

The concerned mother went on to say that the doctors were still unsure as to whether or not her kid would have lifelong scars as a result of the burns. Because his burns are photosensitive and might worsen over time, Kimberley’s kid must keep them covered when he walks outdoors.

“I was just shocked because I’d never even heard of it and I didn’t think a weed could burn. I didn’t realize a plant could cause so much damage. I was also upset because his hand is one thing, and it’s still scarred seven weeks later, but the other burns are on his face. They are a different ball game, and we don’t know if he’ll be scarred or for how long. I’m trying to raise awareness because nobody seems to know what it is,” Kimberley said.

Father of a newborn would have lived longer if doctors treated him on time, they misdiagnosed his fatal disease for migraines and sleep apnea
Doctors refused to do a mammogram on a woman as the ultrasound showed everything was OK, nine years later she is still suffering from the aggressive disease