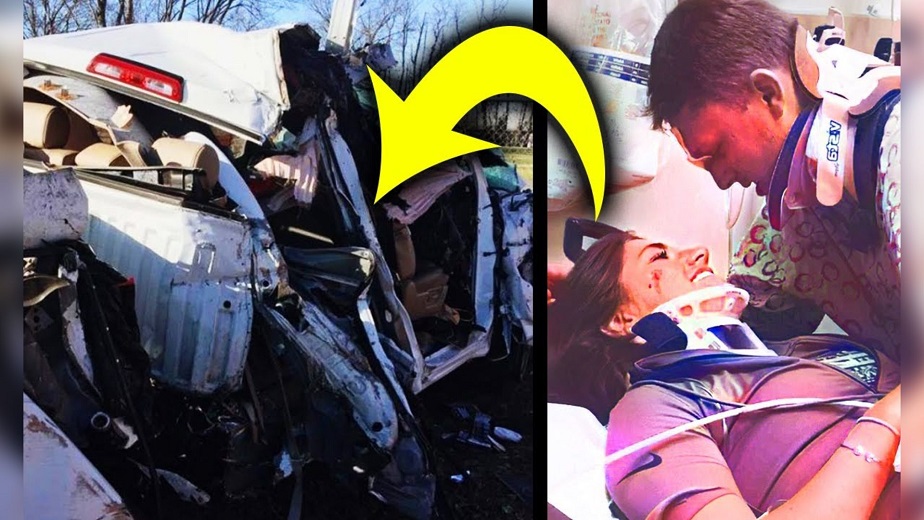 Arika and her boyfriend, Hunter, were in his truck when it drifted off the road and hit a pillar at 75 mph.

It should have “chopped our bodies in half,” Arika said.

Moments before impact, Arika was sure they were going to die. However, at the last minute, Hunter “did exactly what he needed to do to make sure my life didn’t end,” Arika recalled.

Recounting the incident on Facebook, Arika wrote: “God helped Hunter to respond exactly the way he did behind the wheel, guiding the truck exactly where he should have been able to avoid smashing head-on into the pillar. That doesn’t just happen. God doesn’t throw protection around like that for no reason. He does it because he’s not finished with us.”

Trapped in the mangled truck, Arika began screaming as she looked around. The driver’s seat was empty, with Hunter’s head crashed through the windshield. He was bloody and unresponsive.

When she looked out the truck’s window, she wrote: “There was a man — bright with a big white beard. No other cars were in sight — just this man. He was my guardian angel. He saw me and immediately told me that an ambulance was coming.”

“I knew in that moment that Hunter was safe with me. This man — looking at him for a short moment — helped me not witness Hunter being peeled out of the truck. I believe if I had seen that, I would have had a heart attack,” she wrote.

The stranger then walked away, and when Arika blinks, there is a flashlight shining right in her face. The paramedics had arrived.

“Here is the miracle part: no broken bones, concussions that lasted not even 24 hours, no internal damage, and just a few stitches in my knee and Hunter’s face,” she wrote. “Only that after an accident that paramedics wonder how we didn’t die instantly and a truck that looks like it’s been through a tree grinder.”

They were discharged from the hospital less than 48 hours later, and when they returned to the scene of the crash, they found Hunter’s Bible, “open, with a page marked with scripture telling us not to be afraid; Jesus is with us,” she said.

“I’m in awe of the presence of God in this entire situation. Every part of this experience we went through points directly to Him. I am amazed. Absolutely taken away by the presence of God, so blessed for him sending me an angel, so thankful for Hunter and his second chance at life, for his healing and health,” she wrote.

She continued: “Tonight I’m praying for all of you. I want everyone to know the love and power of God. He has a purpose, and it’s so clear that nothing, not even a car accident like this one, will cause His plans for you to change. I’m praying that everyone who reads this can get a glimpse of God’s faithfulness. He is good. And working. And the plans he has for you and your life aren’t going anywhere.”

“Good or bad … it’s God’s doing. It’s his plans unfolding. It’s his kingdom coming. Embrace the struggles and the joys of this life! Without a doubt, it’s a miracle we’re alive, but more than that, it’s simply God’s plan for us. We’re so grateful for this wreck,” she concluded her post. “We are blessed to be okay. And so in love with the amazing God we serve.”

Farmer and 16 cattle found dead, cause of death finally discovered
Black drug dealer fatally shot by police; his mother spoke and caught everyone by surprise