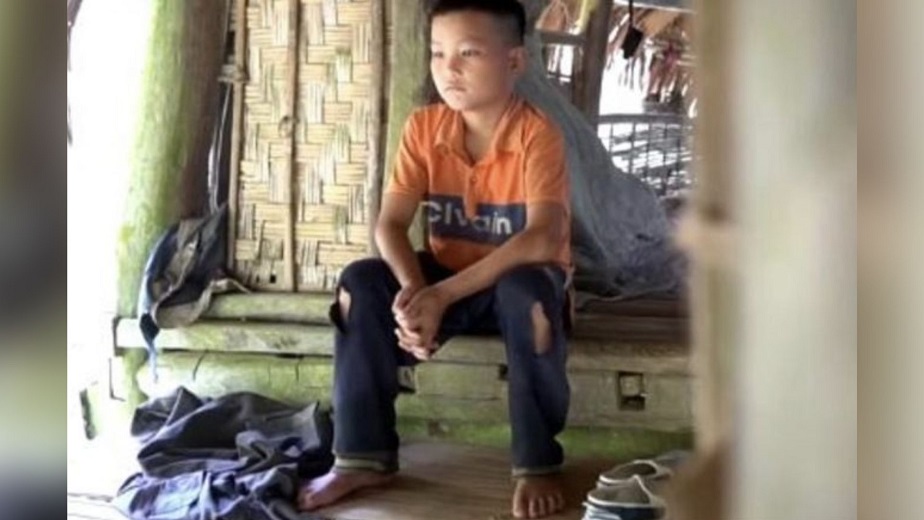 This little boy’s story will break your heart.

He spends his days and nights in an abandoned thatched hut, but he does not want to be adopted by another family.

While most ten-year-olds’ main concerns are schoolwork and writing, Dang spends his days working in the fields around his modest home.

This boy has lost his entire family but refuses to be adopted.

He lost his mother at a very early age and had to live with his grandmother while his father looked for work in construction.

But things took a turn for the worse after his father died in an accident at work and his grandmother moved to another village, leaving him alone.

Before that, his father supported him, and his grandmother cooked for and took care of him. Now little Dang had no one left and took over all the responsibilities.

The 10-year-old boy plants vegetables in a field and collects bamboo shoots for cooking.

He spends his days and nights in an abandoned thatched hut, but he does not want to be adopted by another family.

After hearing about the death of Dang’s father, his teacher managed to raise enough money for the funeral and alerted the local authorities about the boy’s situation.

He never missed a day of school.

Since the grandmother did not want to take care of the boy, his only option was fostering or adoption, but the boy categorically refused, saying that he could take care of himself.

He grows his own bamboo and plants vegetables, while generous neighbors supply him with other foodstuffs, such as rice.

Although he refuses to be adopted, Dang admits that sleeping every night with the wind blowing through the walls of his home is not the most pleasant thing in the world.

After his teacher shared his story, the media began to write about his incredible bravery, and he began to receive support from across the country.

Some have offered to adopt him, while others have expressed a desire to donate food, but it is not clear how much help the humble boy is even ready to receive.

What is especially amazing is the fact that little Dang, despite his hardships, never missed a single day of school.

Every morning he rides his bike and attends classes, then returns home to do his daily chores.

Stranger approached a little boy in a store and the mother burst into tears, you will shed a tear as well when you find out the reason
Woman went to meet the “love of her life,” what happened to her next is a reminder we should not trust anyone