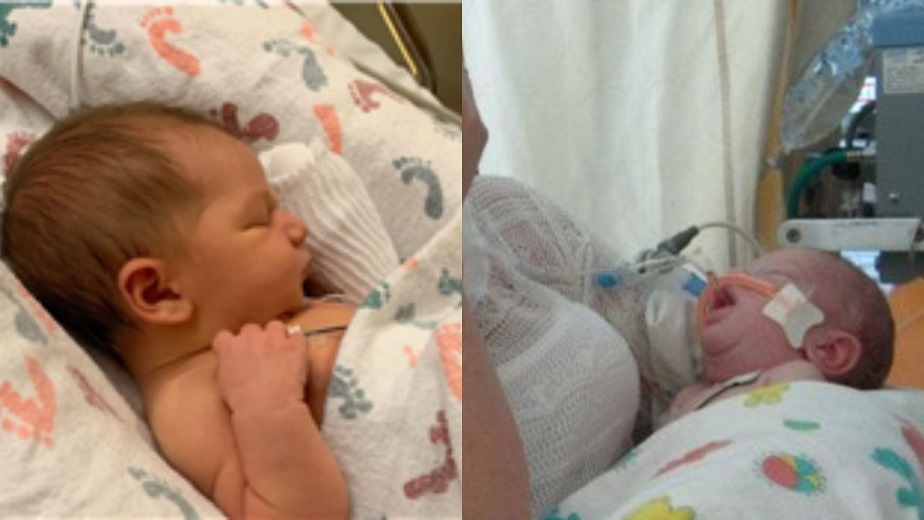 We believe that the biggest pain that a parent can experience is seeing their children suffer, especially if they are the ones who caused it.

A mother of a newborn experienced that kind of pain, forcing her to question herself, “Was she qualified to be a mom?”

She is describing the agony she felt while in the hospital with her newborn daughter since she was unable to nurse her.

Doctors informed the mother, Cara, that her newborn daughter, who was only three days old at the time, may have suffered brain damage.

Many other parents will probably empathize with the courageous mother’s tale and her daughter.

Cara said that after she gave birth, midwives told her that the fact that she had flat nipples would make nursing difficult for her.

“A nurse helped me suction a nipple shield onto my breast, and a lactation consultant came in later and squeezed milk onto a spoon, putting it into my daughter’s mouth. ‘You’ll get the hang of it,’ the staff said.

Only a few hours after Cara had returned home with her new child, she made the decision to seek advice from an after-hours nurse.

Baby formula was given to the infant right away, as instructed by the nurse, and she drank it down immediately.

Cara recalled, “I cried as I was nursing her.”

“I had failed to meet her most basic needs. Was I qualified to be her mom if I couldn’t tell that she was starving?” Cara questioned herself.

The concerned parents waited for their baby to wet the diaper, but when that didn’t happen, they were advised to take their child right away to the emergency room.

The newborn was dehydrated because Cara had a difficult time breastfeeding her in her first few days of life, which caused her to lose a lot of fluids.

Cara shared her story, saying, “As I saw the nurses wrap my three-day-old baby in a blanket nest and put a little IV, something sparked in my brain.” Finally, I felt like her mother.

“They were about to put in the catheter when she peed on everyone. I’ve never laughed with such relief,” Cara said.

“They brought a pump, a sandwich, and a bottle. ‘If you hadn’t started formula when you did, she could have brain damage, or worse,” the doctor told her.

Woman sets a house on fire and smiles with her children while taking a picture in front of it, reveals the reason for her action
“I’m scared for them, I’m terrified,” Single mother fears for her children’s lives as they suffer from the same disease that killed her husband