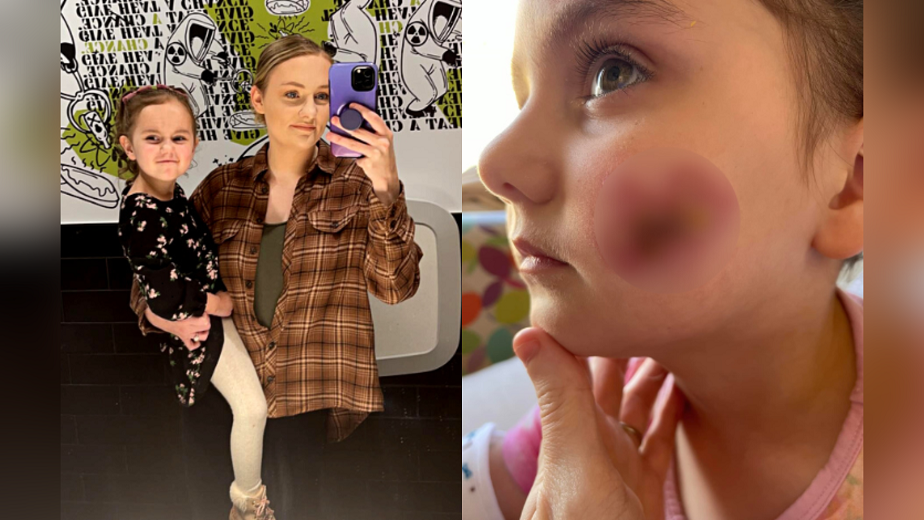 The mother of a four years old girl decided to speak out and warn other parents to be very careful when it comes to their children’s well-being, after her daughter was rushed to hospital, treated with “aggressive” antibiotics and spent a total of four days due to infection the girl developed caused by a simple kiss on the cheek from the mother.

The mother, J. Lippold, was not very concerned when she first noticed a pimple on her daughter Aubree’s cheek as it was something the little girl has had experienced before. Like before, the pimple scabbed and fell off, but things got tricky for the mother when she started noticing that the ‘red dot’ was becoming larger and larger in size every next day. The mother remained calm and thought that the spot was probably infected and tried to treat it at home.

However, three days since Lippold saw the pimple for the first time, Aubree’s health condition worsened as the girl was feeling tired, she was not eating well and had fevers. Lippold took her daughter to the doctor and she was told the little girl had impetigo – an infection that produces red, itchy sores. Since the girl’s condition hasn’t improved in the next days, they visited the doctor again two days later, but they were given the same diagnosis and sent home.

The next morning, on the sixth day since the mother spotted the pimple, Lippold had no options left and rushed her daughter to an Ill. based Children’s Hospital seeking urgent care because the sore had doubled in size overnight and the fever was back. While the doctors were waiting for the test results, they treated the little girl with “aggressive” antibiotics.

As soon as the test results came back, the mother was completely devastated when she learned that she was the one who made her daughter sick. Doctors confirmed that Aubree had contracted HSV-1, the herpes simplex virus, after her mum kissed her cheek.

“This spread quick, and needed 4 full days of antibiotics to start seeing an improvement. Because I had a cold sore that wasn’t fully healed, and was playing around kissing on my daughter, I passed the virus to her through a tiny pimple on her face.,” Lippold wrote on Facebook.

“It is very hard on me knowing that it all started from a kiss from me,” she said in a recent interview with Yahoo News. “I had no idea that HSV could be transferred so easily. Actually, I was not even aware of the severity of HSV. I just thought it was a ‘common cold sore’.”

Aubree was diagnosed with HSV-1, the herpes simplex virus – caused by a simple kiss on the cheek from her mother. She was treated and spent a total of four days in hospital before continuing her antibiotics treatment at home in the next 10 days. Those infected with HSV-1 can develop several symptoms including a fever, sore throat, blisters, and even seizures, and it can be fatal if it spreads to other organs.

“In adults, it rarely causes serious disease and can be managed by a cream or patches that your pharmacist can provide. Some groups are more vulnerable to the virus, such as pregnant women, immunosuppressed patients and babies. If babies are exposed, they can contract a form called neonatal herpes. This will sometimes only affect the eyes, mouth or skin and your baby will, in most cases, make a full recovery. However, if the condition spreads to the organs it can be very serious indeed and causes death in roughly a third of cases,” a doctor, speaking to Mirror, explained.

The mother now advices everyone, especially parents, not to kiss their children and babies when they have a cold sore, even if someone feels like a cold sore is coming. While it doesn’t look serious at first, this kind of infection can be fatal.

“It’s not your fault that you’re Black…,” White California woman was caught racially insulting 39yo African-American performer at a beach restaurant following an argument over failed payment
“We have to protect Black women!,” Young Black woman claims that 59-year-old White man used racist language against her at a store before hitting her several times after he refused to give her ‘some space’