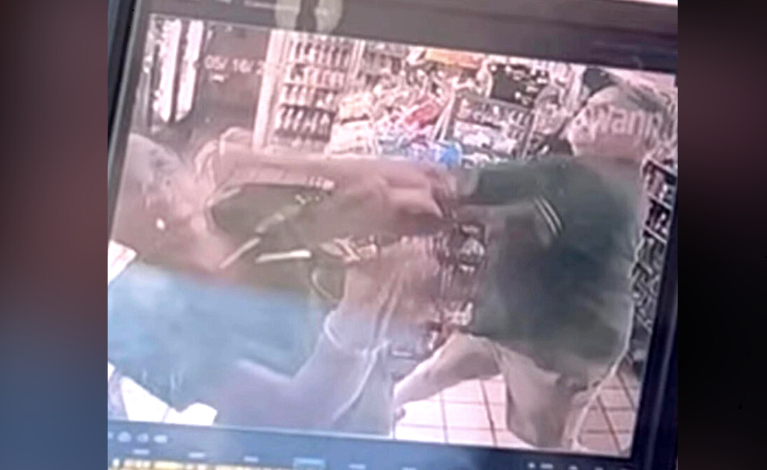 Last week, we reported about the racial incident that happened at a beach restaurant last month when a Black employee, who was working at the restaurant just like any other ordinary day, was racially attacked by a White woman while she was having an argument with the restaurant’s manager over a failed payment. The DJ later informed the public that he has been a victim of racism dozens of times in the last two decades since he moved in the area, but alarming thing seems to be the increasing number of racial incidents nationwide in the last few months.

According to the Post, yet another incident last month left a Black woman with injuries after she was attacked by a middle-aged White man while she was waiting in the line at a gas station store for no apparent reason. In addition to her claims, the victim shared a video of the incident in which the attacker is clearly shown punching her in the face 10 times in what she calls it a “racist rampage”.

The incident reportedly happened mid-May, but was reported by several local news outlets by the end of the month. The victim in the incident, the 23-year-old R. McCoy, said she walked into the Fl. gas station near her home and was followed by an older white man who was already involved in an argument with someone outside.

McCoy said the man was “ranting and raving” and using racist language and at one point, he approached her next to the counter and she asked him to back up. Instead of listening to her, the suspect threatened the victim and told her that he has a gun in his car. Shortly after, things got out of control and the White man attacked the Black woman.

“So at that point, I felt threatened,” McCoy told News4Jax. “He put his beers on the counter in front of my stuff and I slid them over and at that point, that’s when he started punching me in the face.”

McCoy obtained a surveillance video from the store (you can watch below the article) and decided to share it on Facebook with her followers eventually gaining lots of shares and thousands of views. From what is seen in the muted video, the White man with a mustache and a green shirt, attacked the young Black woman punching her in the face at least 10 times before he walked out of the store.

The victim called 911 and the attacker was easily identified since his vehicle’s license plates were caught on the store’s surveillance cameras. Police later informed the public that the attacker was identified as the 59-year-old K. T. Williamson, and he was taken into custody without incident after a “high-risk traffic stop”. Williamson was only charged with misdemeanor battery and is currently out on a $20,000 bond. However, Mccoy’s lawyers, family, and various Black leaders want Williamson’s charges upgraded to hate crime.

Since the clip is muted and it can’t be confirmed if the White attacker racially abused the victim, McCoy was left devastated by the fact that several other people were in the store at the time of the attack and none of them helped her when she was attacked by the middle-aged White man.

“That is NOT ENOUGH!” tweeted Ben Crump, the famed attorney involved in many of the most high-profile civil rights cases in recent US history. “This vicious assault MUST be prosecuted as a hate crime! We have to protect Black women!” he wrote on Instagram.

Minor girl was treated in hospital with “aggressive” antibiotics after developing serious infection caused by a simple kiss on the cheek from her mother, who had a cold sore that wasn’t fully healed, mom now warns other parents
59-year-old man thought that forgetting words mid-sentence and struggling to speak properly for days were long-Covid-19 symptoms until he was diagnosed with aggressive brain tumor; his wife speaks out to raise awareness