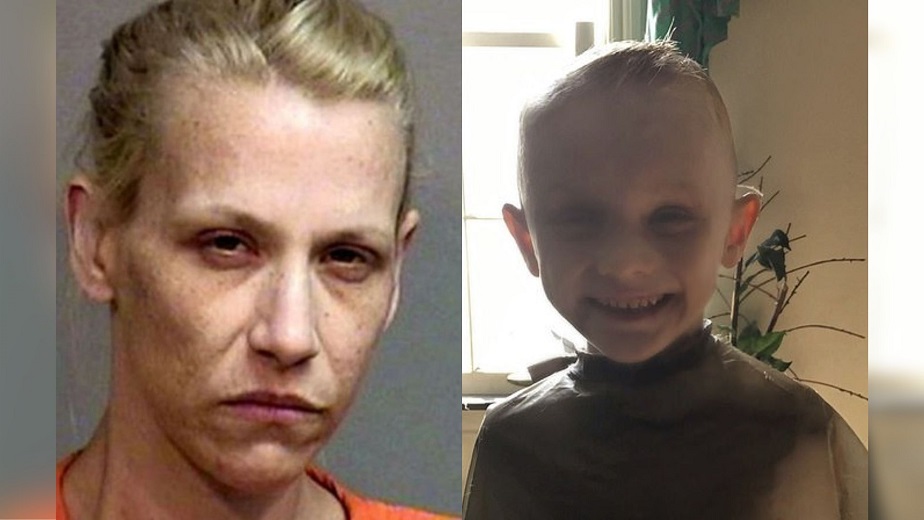 A mother pleaded guilty to beating her 5-year-old son to death before burying him in a shallow grave and reporting him missing. In court, prosecutors played a tape where the son could be heard telling his mother that he hoped “really bad people” did bad things to her.

“Why do you want those bad people to hurt me?” JoAnn asked, prompting AJ to answer, “So I don´t ever see you again.” According to prosecutors, AJ died alone in the dark two weeks later, his head prominently marked by the outline of the shower head JoAnn beat him with as he stood under the freezing shower. He was supposedly being “punished” for soiling himself. Pleading for mercy, JoAnn told the judge: “I had the privilege of having AJ as my son. I loved him, I miss him.” Her words were a stark contrast to the prosecutor’s evidence, which showed the unimaginable physical and emotional abuse AJ endured for years until, brain swelling and choking on his own blood, he died.

“She had beaten this little boy to the edge of death… locked in his room (where) he had to endure the bleak process of death all by himself,” County State’s Attorney Patrick told the court. The discovery of AJ’s body began after his parents reported him missing. An intensive search of the woods near his home turned up nothing, and investigators became suspicious after his parents stopped cooperating.

JoAnn and Andrew, 61, were arrested and charged with first-degree murder in their son’s death. Prosecutors presented statements from neighbors who reported seeing cuts and bruises on AJ for years before his death. A police officer, Kimberley, recounted JoAnn coaching AJ when she asked about the bruise on his hip four months before he was killed. Kimberley told the court: “JoAnn leaned down and in his ear she said to him, ‘Lucy the dog did that to you right?’ And then he said ‘Yes.’”

Dr. Joelle testified to seeing the bruise the same day: “I started by asking him if he had been spanked or hit; he said, ‘Yes.’ I asked him with what, and he said, ‘A belt.’ I asked him, ‘Who did it?’ and he said, ‘Someone not in my family,’ and then he offered that, ‘Maybe mommy didn’t mean to hurt me.’” “We did not want AJ to leave with JoAnn that day,” Dr. Joelle testified, stating that child services had told her that no investigators were available.

A video showed AJ lying naked on a mattress covered in bruises and bandages, with a woman believed to be JoAnn berating him for wetting his bed. Andrew was confronted with the video, and that’s when he led investigators to where they’d buried AJ in a shallow grave, his body wrapped in plastic. The autopsy revealed that he’d been struck multiple times and died from blunt force trauma.

Andrew told the court that JoAnn was the one who beat AJ, and claimed that he’s the one who suggested making him take cold showers instead. The night he died, AJ was put in the shower after JoAnn found the soiled underwear he’d tried to hide. Small, circular bruises found on AJ’s face matched a detachable shower head, which showed that he’d been forced to stand under freezing water, and then beaten. AJ also inhaled some of his own blood after the assault.

Andrew stated that he put AJ to bed “cold, wet and naked,” and that JoAnn later found him unresponsive. Andrew admitted to putting AJ’s body in a plastic container and storing it in the basement. A shopping list including “duct tape, plastic gloves, air freshener, and bleach,” was included in a photograph in the search warrant. Court documents showed AJ’s unfortunate plight since birth. JoAnn and AJ had opiates in their systems at birth, and the Department of Children and Family Services took him into custody for 20 months before returning him to his parents.

Child welfare workers visited the dilapidated house multiple times. And despite the home reeking of dog feces, they claimed that the allegations of neglect were unfounded and left without the boy, even though police pleaded with them to do something, anything. Following AJ’s death, an investigation was launched into the child welfare system. Consequently, a state child welfare worker and a supervisor were fired. JoAnn faces 20 to 60 years in prison. Andrew’s case is still pending.

This ain’t justice! Officer tackles a man and puts a bullet through his head
Man convicted of burying a bus of 26 schoolchildren aged 5 to 14 alive released on parole