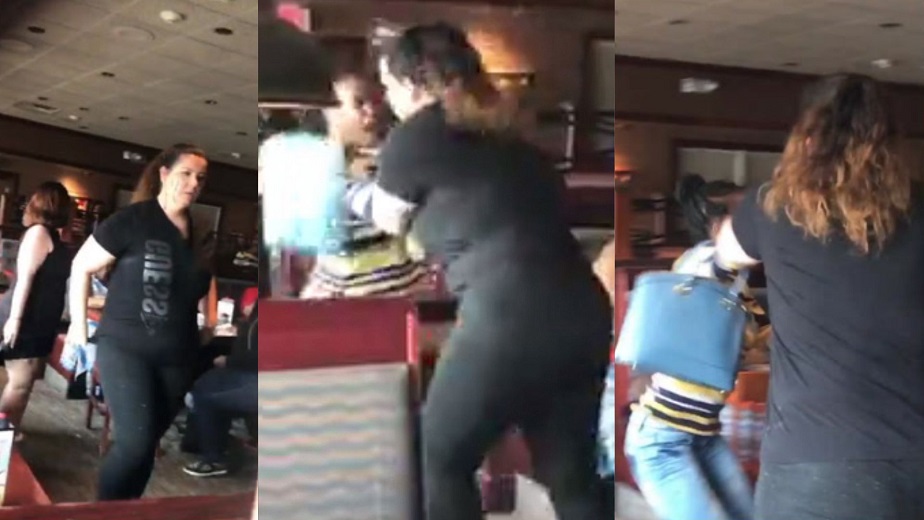 A waitress found herself in a violent brawl after an angry mom smashed a glass against her head as she accused her of disrespecting her disabled son.

The fight, which was caught on camera and posted on social media, has garnered over 66,000 views.

The video shows the waitress charging at the angry mother, saying: “You want to throw s*** at me, you b****?” The diner uses her hands to protect her face and taunts the angry waitress, yelling: “Come on, come on.” When the waitress grabs her arms, she picks up a glass cup and smashes it against the server’s head.

The glass shatters, prompting other diners to shout in shock. Someone is heard screaming: “What the hell!?” A second waitress walks up and holds back the angry waitress before calmly walking her towards the kitchen. The angry mother reappears in the footage shouting: “Disrespecting my disabled child!”

The waitress shouts back: “No I didn’t.” The angry mother charges at her, shouting: “Yes you did. Yes you did,” her voice cracking. She beckons her son out of the restaurant, telling him: “Come on, Aaron.” The angry waitress, unwilling to back down, shouts at them as they leave: “Yep, that’s right.”

It’s unclear at which location the fight took place. Click here to watch the video.

Girl punished for using cellphone at the dinner table, ends up with painful permanent damage
Man caught with a minor girl in a car, but that’s not the worst part