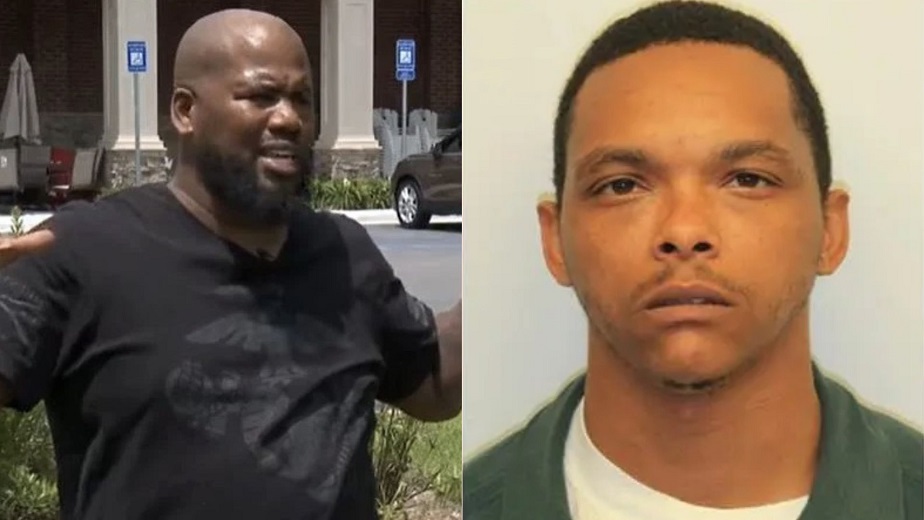 A man has been hailed a hero by residents in his hometown after he detained a man for committing a crime inside a grocery store restroom. The man, Damian, said he had been shopping in the Kroger store when he heard a scream coming from the restroom.

“It made the hairs stand up on the back of my neck because it wasn’t a normal yell,” he said. “A lady behind me just said ‘he ra-ed that girl in the bathroom,’ and once she said that there was nothing else for me to do besides go out the door after him.”

He stated that chaos had erupted in the store, so he decided to take action. The former Marine chased the suspect, 25-year-old Gregory, out through the store’s parking lot, and they ended up in the back of nearby Ace Hardware store. Surveillance footage captured Damian approaching Gregory with a gun. Damian said: “I told him to put his hands in the air. He complied and put them up. I told him to get on the ground, and he tried to say something, and I said: ‘Don’t say a word.’”

A woman in the parking lot rushed to help detain Gregory. He said: “She went inside the store. A minute later she came out with a pack of large zip ties, and so she pulled out a couple and walked over there.” “I kept drawing on him and making sure he didn’t move,” he added. Police eventually showed up at the scene, with surveillance footage showing Gregory in handcuffs as he was taken into custody.

Damian was rewarded for his bravery, with the manager of Ace Hardware rushing over to express his gratitude. “There are 100 bucks on that, and we appreciate what you did,” the manager said as he gave Damian a gift card. Damian said he wasn’t looking for praise, but appreciated the kind gesture. “It was just an awesome thing that you did and we just appreciate it,” the manager added. “Thank you, sir,”Damian replied. Damian stated that he felt good that his community was a little bit safer, and hoped that the victim derived some comfort from the fact that her suspected attacker was behind bars.

“I immediately thought, ‘my wife shops here, I have friends whose wives shop here, my son works here’ So it was just about not letting this person get away after he did what he did,” he said. Damian hasn’t talked to the victim, but stated that he and his family are sending her prayers.“I just hope this doesn’t dictate her life from this point on. There are people who still care, and they’ll act in time of need,” he added.Police stated that they were still processing evidence and interviewing witnesses.

Several men attack a woman, failed to realize she has a surprise waiting for them
Father saw man in his minor daughter’s room, went too far with his actions and got arrested