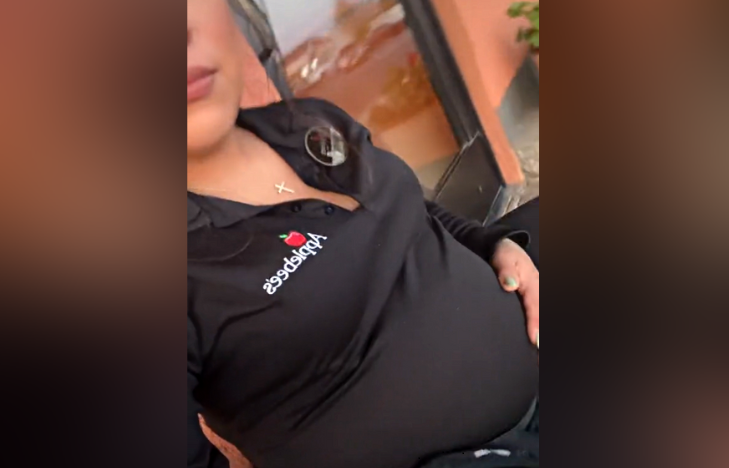 America remains one of the few, if not the only, modern and developed countries without a uniform health system and universal healthcare coverage. While Americans have one of the best health care systems in the world with the shortest wait times, better access to preventive care and care for serious diseases, the fact that there is no universal healthcare coverage leaves many people without medical insurance.

Pregnant women are one of the most affected groups of people when it comes to healthcare coverage and they are often forced to work all sorts of jobs during pregnancy in order to be able to afford health insurance which would later cover part of the hospital costs. So was the case with a young 36 weeks pregnant woman, an Applebee’s employee, who gathered a lot of support online after sharing video where she describes how the restaurant manager ‘fatshamed’ her commenting her pregnant belly while at work.

According to the video that was uploaded on TikTok by the pregnant Applebee employee Maria Pantoja, her manager ‘fatshamed’ her while at work and she was left in tears outside the restaurant trying to calm down before getting back inside. In the video named “When you are 36 weeks pregnant and your manager tells you, ‘What are you having, three kids?’”, Pantoja described the interaction with her manager further continuing the story in the comments section which was later closed by her due to many inappropriate comments by other users.

While sitting outside the Applebee’s chain restaurant, Pantoja said in the TikTok that she told her manager, “I’m going to cry because that’s rude.” He replied, “What, are you going to pop tomorrow?” The location of the restaurant was not made clear in the video.

“Just going to have a cry fest…someone watch my tables,” she captioned the viral video.

The video was initially uploaded on the popular platform earlier this month, but after a few days, Pantoja turned off the comments because of the many inappropriate comments by other users condemning the store manager while expressing support to Pantoja. Once the comments section was turned off, TikTok users continued expressing support to the young girl on other of her videos. Since posted, the video gathered nearly 700,000 views.

As the Independent previously reported, these are some of the comments on the video before the comments section was turned off:

“I came from your work video & I’m so sorry that happened to you but you’re so pretty girl!” wrote one TikTok user. “Which Applebees and what manager,” said someone else. “Ima blow the Google reviews up and say I overheard it as a customer.” “There is a pregnancy act,” explained another user, referring to the Pregnancy Discrimination Act which prohibits dsicrimination against employees affected by pregnancy. “He could be fired and sued.”

“Quit and call the main boss from there or HR or something about him making insensitive comments,” advised someone else. “You don’t deserve that from anyone.”

Pantoja reportedly clarified in a since-deleted comment that a co-worker came to her defense and let the manager know that the comment “wasn’t cool.” The manager allegedly “didn’t mean it like that.”

Since the very first and so far, the only video shared on TikTok, Pantoja hasn’t provided an update regarding the incident she experienced at work or where the restaurant was located.

Just going to have a cry fest …🥲 someone watch my tables. #serverlife #pregnant #36weekspregnant #pregnancyjourney

Toddler dies during surgery after the stubborn senior hospital staff decided to perform the operation even though they were warned the hospital was not properly equipped to handle the procedure, lawsuit
While waiting on the hospital bed to receive treatment, woman claimed she caught her doctor watching videos on YouTube learning how to treat her properly, then changed her mind