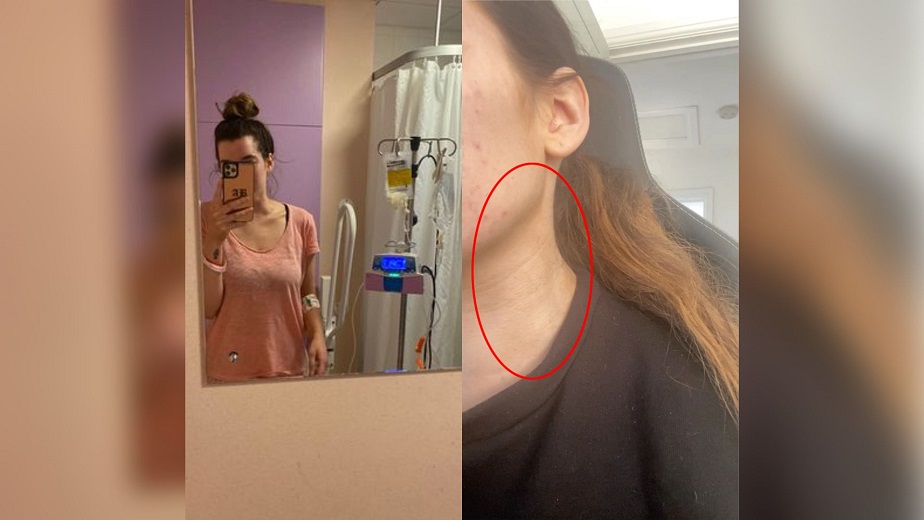 A young woman who had been in good health brushed off her chronic cough, attributing it to a simple virus.

She underwent a series of tests out of concern that it may be COVID, but when she saw that her neck was swollen, she decided it was time to make an appointment with her doctor.

At first, Alix was under the impression that she was infected with COVID.

However, following a series of negative test results, Axil assumed that she must have a virus and didn’t pay the matter any more attention.

But her condition quickly got worse after that, and soon she had a swollen neck and a lot of pain.

Alix also saw that her lymph nodes had begun to swell across her chest and shoulders, and that she could no longer see her collar bone.

Alix went to see her doctor because she was worried about her health, and he first suggested that she take some cough syrup.

Her doctor suspected that she had glandular fever and attempted to treat her with antibiotics. However, none of these approaches was successful in curing her illness. Alix said that she had nocturnal sweats and lost a large amount of weight throughout her ordeal.

She then made another call to the doctor, who checked her out and then immediately sent her to the hospital. A computed tomography (CT) scan was used to find out more about Alix’s condition after preliminary tests ruled out the possibility that she had tuberculosis.

“I spent a week living on the cancer ward, where I had a biopsy and a PET scan and was on several IV bags of antibiotics as I was suffering with pneumonia. It was during this time I was told that I had cancer. They weren’t sure of the primary location of my cancer, and were suggesting that it was likely lymphoma initially,” Axil said.

She was found to be suffering from a kind of lung cancer known as adenocarcinoma, which had spread to her liver, lymph nodes, shoulder, spine, and pelvis, according to the results of a biopsy that was performed later.

“I didn’t really understand what this meant, and it took another doctor to explain to me that my cancer was incurable. I was heartbroken at the news. I remember telling a friend and saying to her that I’m likely to die of this disease one day,” Axil added.

Because the doctors who treated Alix found that she had many blood clots, including one in her brain, she will have to take medicine to thin her blood for the rest of her life.

Alix maintains a positive attitude despite the fact that her condition is considered incurable, but she warns people to never ignore a cough.

“I’ve learned that in this situation, as another lung cancer patient put it, it’s not how long you live, it’s how well you live, and it’s so important to make the most of the life you have – even if it’s limited. I just want to spend time with those I love most, I want to travel, I want to be in nature, and I want to be as well as I can be. I think it’s clear anyone with lungs can get lung cancer, and if you have a persistent cough, please don’t ignore it. Speak with your GP and get it checked, it could save your life.”