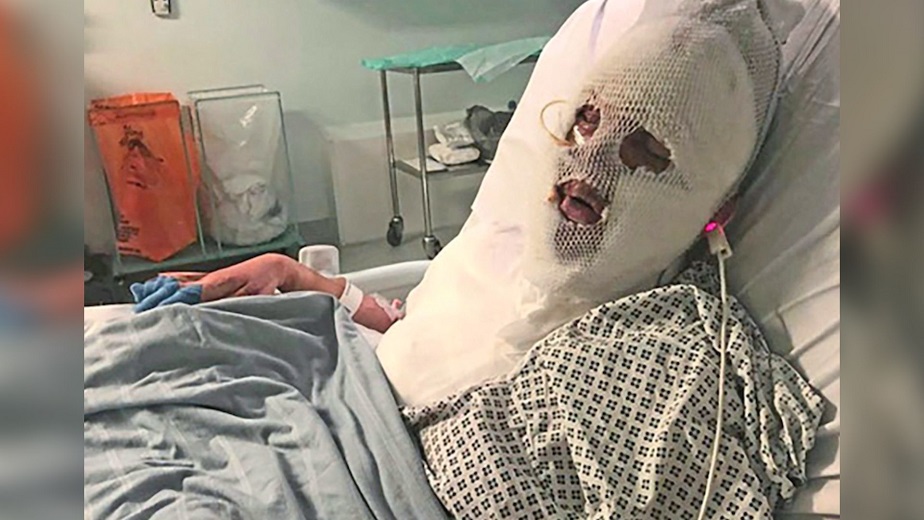 We all know that playing with fire is something that should be avoided.

It all began when some of her friends were going to play a prank at the local pub—sadly, none of them could foresee the consequences.

April woke up in the hospital with a melted face. Doctors there then told her that she had suffered third-degree burns.

From a young age, we’re taught that some things in the world are too dangerous or volatile to make them suitable to play with. Fire, of course, usually finds its way onto that list.

When you’re a kid, your parents usually tell you to stay away from open fires, lighters, and other objects that may result in great harm and cause problems.

It’s essential for us to take these warnings seriously: always respect fire and never think, “It won’t happen to me.”

Of course, fire can be fascinating, alluring, and powerful. But it can also be deadly—just ask 29-year-old April.

In April 2021, April was enjoying a birthday visit to her local pub with her cousin Ashleigh and some friends. It was a special day for many reasons: It was April and her cousin’s first night out after the strict COVID lockdown. Simply put, it was a day for celebration.

But the evening soon turned into a nightmare.

One man in their group decided to pull a prank that would end in total disaster. The man reportedly threw ethanol on a heater at the pub, causing the bottle of fuel to explode.

April and Ashleigh saw a burst of flames and panicked. The bottle blew up just a few feet from where they were sitting. Both women “were engulfed in flames.”

At first, April didn’t think it was that bad. Sure, she felt the pain, but she couldn’t comprehend the urgency of the situation.

She was in deep shock. Accordingly, the only thing she said was:

But a short while later, she started to feel worse and was soon rushed to the hospital by ambulance.

“When you’re in that situation, you just don’t know what to do,” April told the media.

Once April arrived at the emergency room, the situation was so precarious that doctors had to put her in a coma for four days.

Medical professionals concluded that she had suffered third-degree burns, and April’s pain was unbearable. April was also forced to undergo several surgeries and treatments in hopes of restoring her face.

April had bandages all over her face to help the devastating wounds heal faster.

All told, she spent two months in the intensive care unit. The 29-year-old mother was allowed to have visitors, but her 8-year-old son, Franklin, was so scared when he saw his mom’s face that he didn’t want to sit beside her for months.

He was too scared to see his mother’s appearance under all the bandages. As part of her treatment, April had to wear a face and chest shield 23 hours a day, which works but is very uncomfortable.

“They scratch and itch, and I can barely breathe in them, but the swelling and redness on my chest have already gone down, and they are exceedingly helpful,” April said.

“I have a plastic mask I wear on my face with holes in the eye, nose, and mouth.”

April’s cousin, Ashleigh, was also on a ventilator, fighting for her life at the hospital. As a children’s nurse, she had seen a lot in her life.

Ashleigh described her pain as “unreal” and found it hard to recover from the accident. At first, she didn’t dare look at herself in the mirror. Thankfully, though, April and Ashleigh got through this hell together.

“It was difficult to readjust to normal life.” It still is.

“I still don’t like going out by myself.” It completely changed me as a person, even now. “Me and April live five minutes away from each other, so we’ve been going through it together,” she said.

April has also been forced to sleep with the plastic mask, which has been challenging and uncomfortable. As if that wasn’t enough, she has to undergo laser treatment for her scars every six weeks.

It’s now been a year and a half since the tragic accident, and although the treatments have helped, it’s still hard for April. She hardly dares to go outside the door and has developed a social phobia since the incident.

The 28-year-old can barely stand to show her damaged face to strangers, preferring to be at home with her son instead.

“It was difficult to readjust to normal life.” It still is. I still don’t like going out by myself. “It completely changed me as a person, even now,” April added.

Today, she can cover many of her facial scars with makeup, and based on her Instagram, April seems to have healed nicely over the past year and a half.

But even though the former party girl doesn’t get out as often as she used to, April has decided to share her story and journey in the hope she can help others.

“It’s helped me get through it, and loads of people say how much it’s helped them knowing that I’m able to share my journey,” she says.

God bless you April, you are truly a beautiful woman.

“He defied the norms and standards,” Mother shared pictures of her newborn baby, leaving many people stunned; doctors were as well shocked by the size
Evil stepmother tried to conceal her 10-year-old stepdaughter’s death by burning her body in a trash can, jury delivered a harsher sentence than she had hoped for