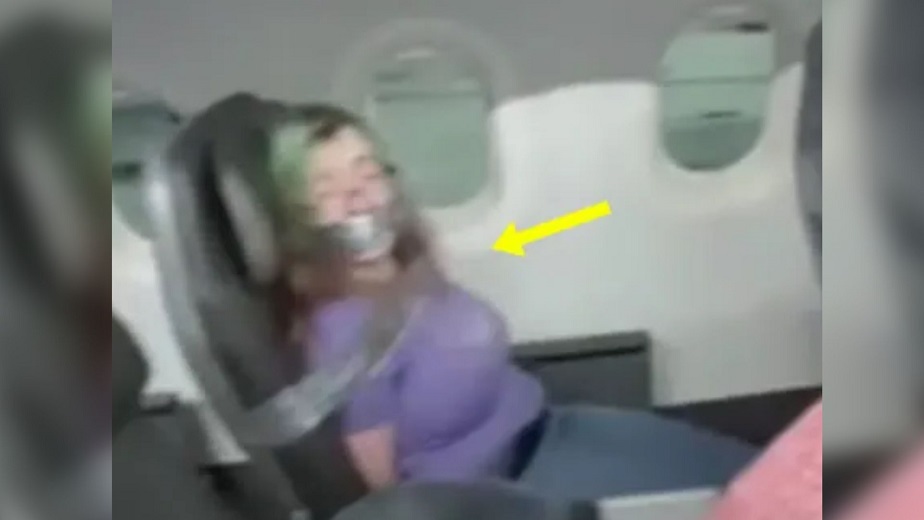 Unruly passengers on flights in the U.S. can cause a variety of problems, including disruption of the flight, physical or verbal altercations with crew members or other passengers, and failure to follow instructions from the crew. This can be a serious safety concern, as it can distract the crew and potentially compromise the safety of the flight. Airlines have policies in place to deal with unruly passengers.

On American Airlines Flight 1774, an unruly woman was duct-taped to her seat after she allegedly attacked the flight crew and tried to open the cabin door in the middle of the flight.

In a video posted on social media, the gray-haired woman can be seen with silver duct tape over her mouth, with her body and arms seemingly taped to her seat.

She is heard screaming: “You! You! You!” as other passengers exited the flight, with flight attendants calmly nodding their goodbyes.

The two-hour flight departed at midnight after a three-hour delay. However, about an hour into the flight, all hell broke loose. In subsequent videos, @lol.ariee, the passenger who posted the original video, explained the chaotic scene.

She stated that the flight crew went on to lock bathrooms and started grabbing bags from overhead bins, but didn’t explain what was happening, she stated.

“It was just kind of like chaos and no one knows what’s going on,” she said.

Finally, according to her, the pilot was heard over the intercom asking passengers to remain in their seats and referencing “a bad situation in the plane right now.”

“Then we’re gradually starting to hear more and more screaming, and we’re like, ‘Wait a minute,’” she said.

When they were about to land, a flight attendant sitting near them explained that a woman “had an outburst and like, had the urge to get off the plane. And she was saying, ‘I need to get off this plane,’ and she went up to the exits and started banging on the doors, saying, ‘You need to let me off this plane!’”

“I guess it took all five flight attendants to subdue her and like, literally take her down,” she stated. “They pretty much took her down, put her in the seat, and duct taped her.”

American Airlines confirmed the incident and said that the woman had attacked and bitten a flight attendant when she “tried to open the forward boarding door.” She was restrained “for the safety and security of other customers and our crew,” the airline said.

The flight was met by emergency personnel on the ground, and the woman was taken to a local hospital, the airline stated.

She was placed on American Airline’s “internal” no fly list pending an investigation.